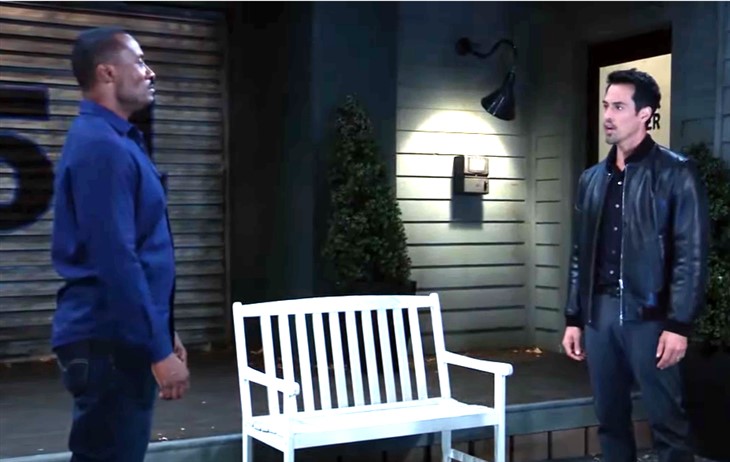 Let’s once again forget that Shawn (Sean Blakemore) voluntarily stayed in prison to make up for other past sins when Hayden Barnes (Rebecca Budig) told him she knew he wasn’t the one who shot her in the head. But now he wants to clear his name and make the real culprit pay. Never mind that Hayden actually married Nikolas (Marcus Coloma) after learning he was the one who put her in a months-long coma back in 2015.

Nikolas already offered Shawn money to go away and keep his mouth shut, but Shawn doesn’t want to hear it as Nikolas remains cocky and tells him he doesn’t have any real evidence the police will buy anyway. When Ava (Maura West) sees them, she wants to know what the heck is going on.

Even Alexis Davis (Nancy Lee Grahn) may think Shawn’s plight is a lost cause as she counsels Spencer Cassadine (Nicholas Chavez) not to confront his father again. Does she want to leave well enough alone and just get out of jail already or does she have another reason for the advice she gives her nephew?

It looks like Anna Devane (Finola Hughes) did just what Valentin Cassadine (James Patrick Stuart) asked. She delivered Victor Cassadine (Charles Shaughnessy) on a silver platter so that Valentin could try to get to the bottom of this paternity question.

Does Victor have any proof of his claims? Valentin needs to know what is at stake for the sake of his daughters. Or at least Charlotte (Scarlett Fernandez), who is his actual daughter, but he doesn’t know he only has one little girl.

When Dante Falconeri (Dominic Zamprogna) and Sam McCall (Kelly Monaco) visit The Savoy, they hear about the men that Curtis Ashford (Donnell Turner) kicked out of his club and Dante gives him a warning about the Novaks and how dangerous they are. Little do they know they have their eyes on Curtis’ business.

Finally, Olivia Quartermaine (Lisa LoCicero) gets a little drunk and starts venting all her problems. It looks like Robert Scorpio (Tristan Rogers) is right there to listen. Stay tuned to General Hospital weekdays to see how these stories play out.