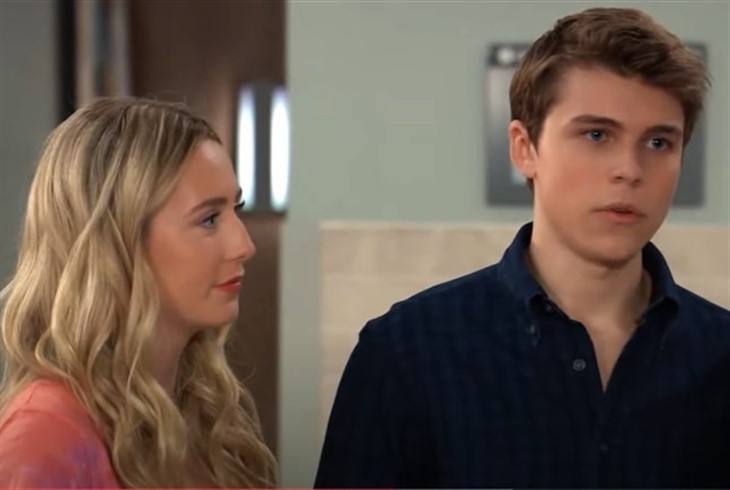 General Hospital spoilers for Thursday, November 11, 2021, reveal Josslyn Jacks and Cameron Webber finally having the house to themselves for a night they hope they’ll never want to forget.

General Hospital Spoilers – Will Josslyn Jacks And Cameron Webber Do The Deed?

Josslyn (Eden McCoy) and Cameron (Will Lipton) are all ready to lose their virginity and sleep with one another for the first time. Joss packed her toothbrush and favorite soap and Cam has a condom on hand so they can be safe. Both seem extremely nervous, which makes viewers wonder if they are ready for this.

Even Trina Robinson (Sydney Mikayla) wondered if Joss was ready and hoped she wasn’t planning on making a big mistake just because she feels pressured by the likes of Esme Prince (Avery Pohl). But here they are finally alone in Elizabeth’s (Rebecca Herbst) living room while Liz enjoys a night out for her birthday. Cameron suggests to Joss that they head upstairs to his bedroom. Will she have second thoughts or do what she set out to do?

Meanwhile, Cameron’s mom is having relationship issues of her own as she confides to Portia Robinson (Brook Kerr) about her closeness with Hamilton Finn (Michael Easton). Portia suggests that maybe Liz isn’t ready for someone new in her life yet.

Now that Nina Reeves (Cynthia Watros) and Sonny Corinthos (Maurice Benard) convinced Phyllis Caulfield (Joyce Guy) to take Sonny up on his offer and create a new Tan-O at Charlie’s Pub, the pair sit down and discuss their success at the bar. When Sonny mentions that maybe Nina and he should not keep meeting like this, but he won’t stop her from going to Charlie’s, Nina wonders something else.

She is a woman awaiting trial for identity theft thanks to Michael (Chad Duell) bribing a Pennsylvania politician. Nina asks Sonny if he plans on using his power to keep her out of prison. Does Sonny have an answer for that one?

Valentin Cassadine (James Patrick Stuart) is still laid up in the hospital thanks to Peter (Wes Ramsey) and his evil ways. However, Austin Holt (Roger Howarth) can only sing Gladys Corbin’s (Bonnie Burroughs) praises to him. When Valentin wants to know what Austin knows about Gladys, Austin tells him that she has all the answers he needs. Austin just knows this somehow has something to do with Brook Lynn (Amanda Setton) — and he wants revenge.

Over at the Jerome Gallery, all Scott Baldwin (Kin Shriner) can think about is Liesl Obrecht (Kathleen Gati) and how she is missing in Crete. To that end, he begs Ava Jerome (Maura West) to help her bring Liesl home. Can she use her Cassadine connections? Stay tuned to General Hospital weekdays to see how these stories play out.

Tiger King 2: Netflix Denies Carole Baskin Has A Claim Against The Promo