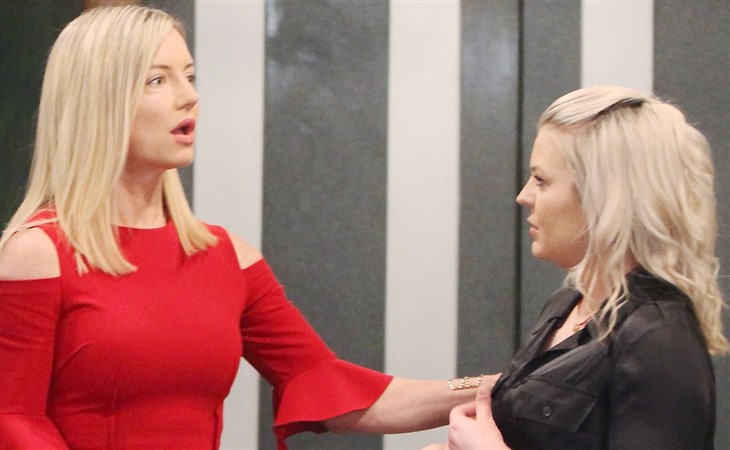 General Hospital (GH) spoilers and updates tease Nina Reeves (Cynthia Watros) has been keeping secrets. Nina knew that Sonny Corinthos (Maurice Benard) was alive and had amnesia. She had found out that Sonny was alive when she went to Nixon Falls. Nina needed to go to Nixon falls in order to clear her head. Nina was upset that she had been kept out of her grandson Wiley Quartermaine-Corinthos (Caleb and Kyler Ends) life. Nina needed to figure out what to do about being able to be a grandmother to Wiley.

Nina has been found out and she has been dealing with the repercussions of her actions. Nina is trying to put together her life again. Nina knows that Maxie Jones (Kirsten Storms) is keeping a secret. Maxie is keeping the secret that her daughter Louise August (Odell-Diaz Twins) is with Brook Lynn Quartermaine (Amanda Setton). Maxie believed that Louise needed to be with Brook Lynn because of her father Peter August (Wes Ramsey). Nina wants to help Maxie with her secret and decide what to do about Louise and Peter.

Nina is keeping another big secret. Nina and Sonny had been in a relationship in Nixon Falls. Nina has told her friends Ava Jerome-Cassadine (Maura West), Phyllis Caulfield (Joyce Guy), and Maxie about her secret. Nina knows that Sonny’s wife Carly Corinthos (Laura Wright) will be furious to find out that Sonny and she had been in a relationship. Nina is facing legal troubles because of Michael Corinthos (Chad Duell) who is trying to bring Nina up on charges for identity theft in regards to keeping the fact that Sonny was alive a secret.

Nina is worried that she will not get to see Wiley because Michael will keep her from him. Michael does not want Nina to be around Wiley because he thinks that Nina is not a good part of his son’s life. Nina is trying to keep her distance from Wiley and Sonny. Nina knows that Sonny is back with Carly but she still has feelings for him.

Maxie wants to get Louise back but she is still worried about Peter. Brook Lynn is determined to keep Louise who she named Bailey. Brook Lynn wanted to have Louise because she wanted to get her ELQ shares back from Valentin Cassadine (James Patrick Stuart). Brook Lynn has passed off Louise as Valentin’s daughter. Valentin believes that Louise

Maxie and Brook Lynn are trying to figure out what to do about keeping their secret. They are worried that Gladys is going to tell Valentin the truth. They are worried that Gladys will tell Dr. Austin Gatlin-Holt (Roger Howarth) about their secret. Austin delivered Louise but he was knocked unconscious after by Marie Hopkins (Kimberly J. Brown) who had been hired by Peter. Austin may remember what happened and may tell Valentin. Austin is upset with Brook Lynn because she nearly cost him his medical career and the possibility of getting shares in ElQ. Maxie Is concerned that Peter will find out about Louise.

General Hospital Maxie and Nina are trying to figure out what to do about the secrets they are keeping. Maxie wants to be able to be Louise’s mother. Can she find a way to get Louise back from Brook Lynn? Maxie is worried about Peter. Could Peter find a way to get Maxie to believe that Louise would be safe with him? Nina knows that Carly will want to come after her if she finds out the truth about her and Sonny.

What will Nina do when Carly finds out that she and Sonny were more than friends in Nixon Falls? Nina wants to be a part of Wiley’s life. Can Nina find a way to get Michael to let her have a place in Wiley’s life? Nina still wants to be with Sonny. Will Nina find a way to be with Sonny again? Be sure to catch up on everything happening with GH right now. Come back here often for General Hospital spoilers, news, and updates.