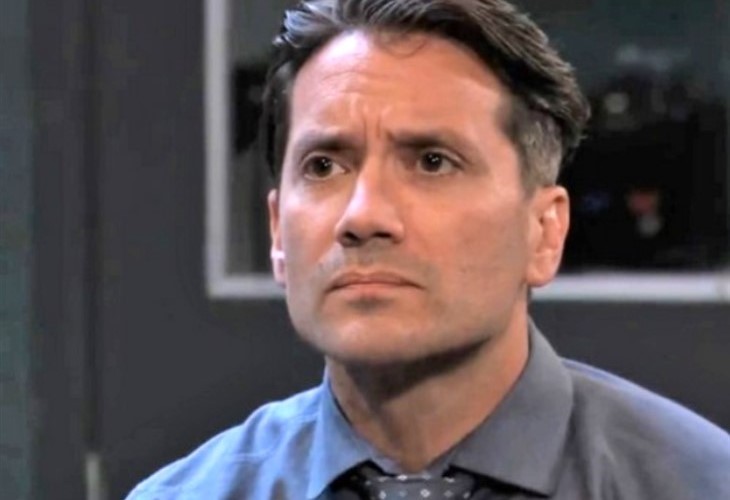 General Hospital spoilers tease that things will go down at The Savoy, and Curtis Ashford (Donnell Turner) must be on his guard in an upcoming episode of General Hospital!

General Hospital viewers will recall that Dante Falconeri (Dominic Zamprogna) had warned Curtis of underworld elements around Port Charles in a previous General Hospital episode. Curtis and Portia Robinson (Brook Kerr) had been concerned about the mystery man named Marshall (Robert Gossett) possibly being someone who might be working for Cyrus Renault (Jeff Kober), considering he’d been watching both Curtis and TJ Ashford (Tajh Bellow) and Cyrus having been the only common denominator.

There was also the threat of the Five Families – or what was left of them – coming around, and sure enough, Joey Novak (Patrick Zeller) came to The Savoy talking trash and flirting with Carly Corinthos (Laura Wright) on a night out with Olivia Quartermaine (Lisa LoCicero), and Curtis made sure that “the trash was taken out” of The Savoy! General Hospital viewers will recall that Marshall and Joey encountered one another shortly afterwards!

General Hospital viewers will recall that Sonny Corinthos (Maurice Benard) visited Joey Novak in General Hospital, after someone gave him a beatdown within an inch of his life! Sonny wanted to make sure Joey knew he’d crossed a line when he messed with Carly! Sonny even told Joey he wanted the Novak family’s holdings, territories, and everything the Novaks had to make sure Joey wouldn’t be a problem! It was confirmed by Sonny that he didn’t beat him up or have him beaten up, but someone sure did!

Joey told Sonny the family wouldn’t like it if he complied with Sonny’s demands, but Sonny didn’t care. Joey appeared to be afraid of Sonny – so he will be more likely to tell the remainder of the Novak family that someone else beat him up – which someone else did, and since it was not far from The Savoy and he was made to leave, the remaining Novak goons will likely retaliate against Curtis!

General Hospital viewers will recall that Joey was just as afraid of mystery man Marshall as he appeared to be of Sonny Corinthos! General Hospital viewers know that Joey knows who beat him up, but he’s too much of a chicken to finger his attacker, so it will all come back to The Savoy, and Curtis as the owner! Curtis will see that there are goons – perhaps some he recognizes from when Joey’s been at The Savoy before – and he’ll have to be on his guard!

Curtis heard about Joey’s beatdown, from Dante when he was there talking to him about the underworld elements. Dante had mentioned that Joey’s beatdown would not go unanswered, and the answer would be at The Savoy! Curtis will have to pivot and make a sudden change of plans at his club to make sure the goons are dispatched and everyone is safe!