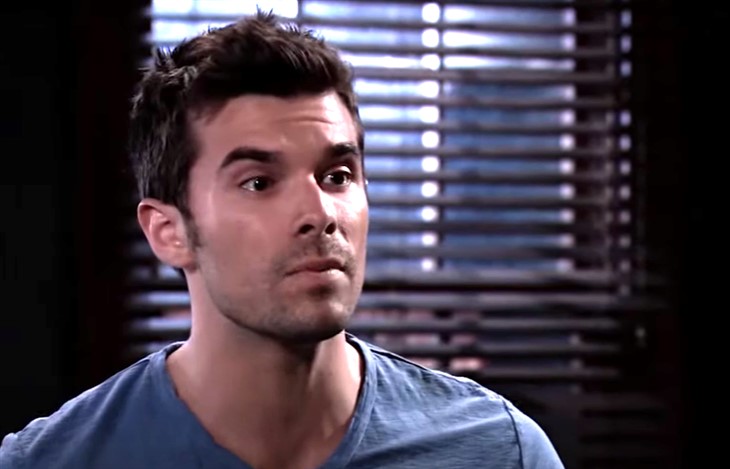 General Hospital (GH) spoilers tease that Harrison Chase (Josh Swickard)i s about to figure out the truth about the night that Maxie Jones (Kirsten Storms) gave birth. As viewers know, Maxie handed her baby to Brook Lynn Quartermaine (Amanda Setton) to care for until the baby’s father, Peter August (Wes Ramsey) could be brought to justice. Brook Lynn was never pregnant, although she pretended to be in order to fool Valentin Cassadine (James Patrick Stuart). But even as Chase inches closer to the truth, what will he do with the information?

Up until a few months ago, Chase would likely have turned the information over to his superiors in the police department. But all that was before Chase poisoned and left paralyzed for months. Chase isn’t quite the same person he was before he almost died. And if you add in the fact that he and Brook Lynn have gotten quite close, Chase’s decision may be quite different before all of that happened. Plus Gladys Corbin (Bonnie Burroughs) has put the pressure on Brook Lynn.

Gladys has a recording of Brook Lynn admitting that Valentin isn’t her baby’s father. Of course, that is only part of the story but it was enough to get Brook Lynn and Maxie to come up with an alternative father for Brook Lynn’s non-existent baby. When the first attempt falls through, it looks as though Chase will step up and claim the baby as his own. While this may very well be the best thing for Brook Lynn and Maxie, it could cause major problems for Chase down the road.

Chasse is supposed to be investigating the whereabout of Maxie’s baby. Although he will solve the “crime”, if he goes along with Brook Lynn and Maxie, he is effectively hiding the evidence in a criminal investigation. As a police officer, this could put an end to his career. Chase will believe he is doing the right thing, but will it be worth losing his career after he has lost so much already?

Is Chase about to discover Maxie and Brook Lynn’s secret? Will he step up as the father of Brook Lynn’s baby? Will he lose his job for all his efforts? Anything can happen in Port Charles so stay tuned to General Hospital airing weekdays on ABC. And don’t forget to check back right here regularly for all your General Hospital news, information and spoilers!