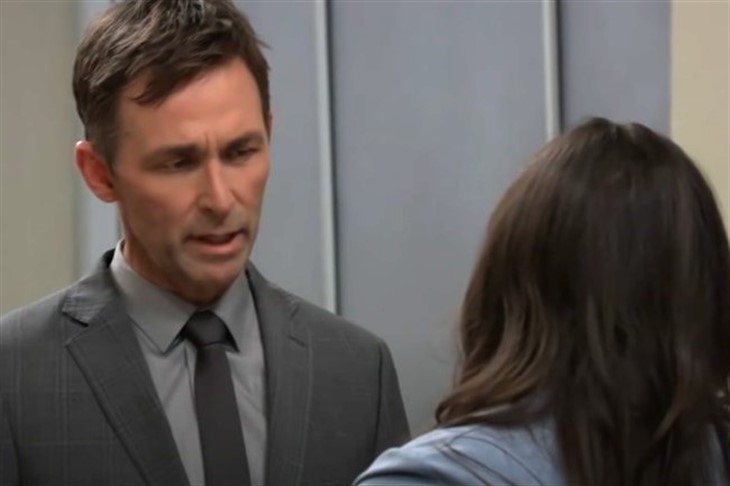 General Hospital (GH) spoilers and rumors tease that Valentin Cassadine (James Patrick Stuart) may be close to figuring out Brook Lynn Quartermaine’s (Amanda Setton) deception on his own, or at least he certainly suspects it! General Hospital viewers will recall that he called her bodyguard Yuri (Cyrus Hobbi) and told him she is in danger from Peter August (Wes Ramsey)!

General Hospital Spoilers And Rumors – Why Would Brook Lynn Quartermaine Be In Danger From Peter August?

Unless Valentin was talking about retaliation by Peter against him and his children, “Bailey Lois Quartermaine” (Harper and Scarlett Bloom) assumed to be one of them and Charlotte Cassadine (Scarlett Fernandez) being the other, why would Brook Lynn be in danger? General Hospital viewers will recall that Valentin already had hired Yuri to protect Brook Lynn, “Bailey” and Charlotte previously!

General Hospital viewers will recall also that the reason behind Valentin hiring a bodyguard in the first place already had been in case of Peter August trouble – but it’s very telling that Valentin wanted Yuri to report her every move back to him immediately after conversations with Austin Gatlin-Holt (Roger Howarth) about Brook Lynn scamming him, and referring him to Gladys Corbin (Bonnie Burroughs) and then Gladys refusing to tell Valentin what she was going to previously before being interrupted by Brook Lynn! Valentin had tried to get out of her what she had been intending to tell him, but she refused, only saying someone would get hurt! It was immediately afterward that Valentin called Yuri!

General Hospital viewers will recall from a conversation with Victor Cassadine (Charles Shaughnessy) after his confession that he was Valentin’s birth father, that Victor had told him in order to protect him from being killed as a child that he’d “hidden him in plain sight”. Remembering this phrase may have clicked in Valentin’s brain and caused him to suspect that Louise August (Harper and Scarlett Bloom) was also being hidden in plain sight, in the person of Bailey! Valentin may be hurt although he didn’t show it – but more important is protection from Peter.

This may be why Valentin told Yuri to follow Brook Lynn much more closely and to report back to him everywhere she goes, everything she does, and everyone she talks to and if possible, every detail of every conversation. General Hospital viewers know if Valentin’s hunch is right, Brook Lynn, who is pretending Bailey is her and Valentin’s baby would certainly be in danger from Peter, even though he is otherwise occupied on Cassadine Island right now – it doesn’t mean he doesn’t have spies in Port Charles watching Maxie Jones (Kirsten Storms) and Brook Lynn as well and reporting every move back to him, since it would be deemed unusual to Peter for Maxie and Brook Lynn to have anything to do with each other, let alone be behaving like besties!

General Hospital viewers can tell that Valentin is keeping his emotions very close to the vest, and not giving hints to anyone, not even Anna Devane (Finola Hughes) that he suspects Bailey is really Louise! General Hospital viewers know that he is very attached to the baby and it hurts him to think she’s not really his, but that love for her demands his silence regarding his suspicions! No one can know the secret because it would put her in more jeopardy, and Maxie and Brook Lynn as well; Peter would certainly kill or have a minion kill anyone who stands in his way of reclaiming his daughter and her mother!