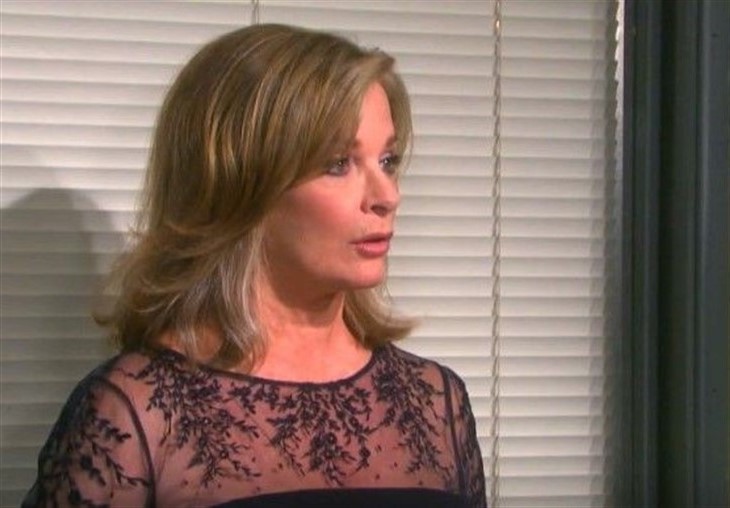 Days of Our Lives spoilers for the week of November 22 reveal that Steve “Patch” Johnson (Stephen Nichols) gets a lead on John Black (Drake Hogestyn). However, right before that, Steve asks Marlena Evans (Deidre Hall) for help. Could “MarDevil” give a “hot tip” on John’s whereabouts only to intentionally send Steve in the wrong direction?

Days Of Our Lives Spoilers – Searching For John Black

DOOL spoilers reveal that John is missing. Marlena told Belle Black (Martha Madison) that John went out of town on a case. However, when Belle told Steve this, he knew something wasn’t right. Even though Steve and Kayla Johnson (Mary Beth Evans) have noticed Marlena seems off, they haven’t clued in that she’s possessed by the devil again.

It is teased that Steve needs a clue of where to start looking for John. Even though Marlena is acting a bit odd, Steve doesn’t think she has anything to do with John’s disappearance. So, he will ask Marlena as she is John’s wife. Steve hopes that John might have told her some tiny detail about the case he’s working on, such as where he was going.

Days of Our Lives spoilers reveal that “MarDevil” doesn’t need any more complications. Satan already has John shackled in the DiMera crypt and now Susan Banks (Stacy Haiduk) is there, too. Susan makes a run for it, but is caught before she gets very far. Plus, Johnny DiMera (Carson Boatman) almost went in the DiMera crypt before he was stopped by “MarDevil.” So, Lucifer wants to be sure that Steve doesn’t get any closer to the truth. One way the devil might do this is by giving Steve a “hot tip” about John.

It’s possible that the devil sends Steve in the completely wrong direction. “MarDevil” might even push Steve to look for John outside of Salem, maybe even out of the country. The further that Steve is from the DiMera crypt and Salem, the less likely he is to find John.

While Steve is sent on a wild goose chase, the devil decides to get rid of John permanently. However, will Susan be forced to kill John, or will there be a miracle in the presence of evil?

Why do you think Steve asks Marlena for help and what does the possessed psychiatrist say? Will Satan send Steve on a wild goose chase and how will Susan deal with being ordered to kill John? Let us know your predictions on this storyline and keep watching the NBC soap to find out what happens next.