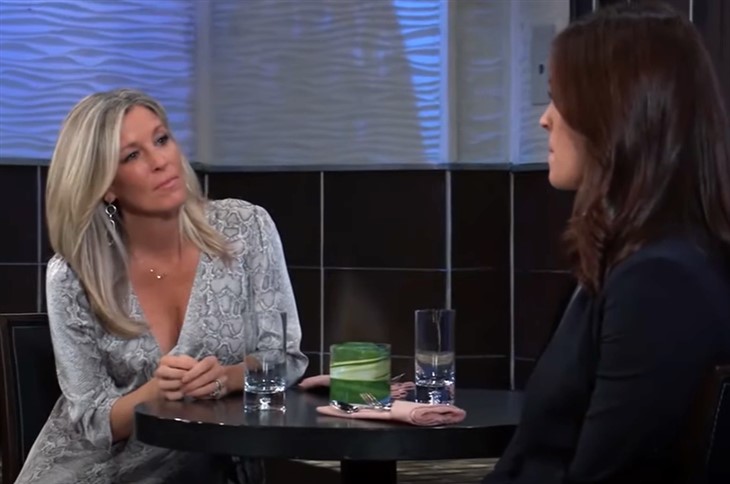 General Hospital viewers will recall that in the tunnels under the Cassadine castle on Cassadine Island, Drew Cain (Cameron Mathison), Jason, Liesl Obrecht (Kathleen Gati) and Britt were caught in the deteriorating tunnels by Peter August, (Wes Ramsey) who started a gunfight! Drew attempted to get the women to safety while Jason attempted to defend them against Peter, drawing him away from the rest of them.

But as the gunfight continued, Peter darted away while a tunnel collapsed onto Jason, and left the other three unconscious on the ground, with rubble all around them. Drew, Liesl and Britt make it back to Port Charles safely, although Liesl will undoubtedly be hospitalized to continue recovering from her harpoon wound at General Hospital. Britt’s heart will be broken – she never told Jason she loved him because she never admitted to herself out of self-protection, although the two had shared a tender hug when Jason and Britt had first encountered each other again after she and Liesl were rescued from Peter initially by Jason and Drew.

General Hospital viewers know that there will be many in Port Charles who will be affected by Jason’s presumed death; Britt undoubtedly wanted to try to dig him out but was probably stopped by Drew and Liesl, less they also lose their lives. General Hospital viewers will remember that Drew held her back from rushing forward as the tunnel collapsed in on Jason, and he too was grieved!

Drew and Liesl would have assumed there would have been nothing they could have done to save him – and besides, Peter could have darted out from anywhere and finished all of them out! Drew, of course is affected – his twin had come to save him but he was unable to save his twin. Danny Morgan (Porter Fasullo) and Jake Webber (Hudson West) have lost their dad all over again, although they gained back their uncle, and Scout Cain (Ella Ramacieri) gained back her dad although she too lost Uncle Jason.

Michael Corinthos (Chad Duell) will grieve, and Wiley Corinthos (Caleb and Kyler Ends) will miss him too, considering sometimes Jason took care of Wiley like he took care of his father. Monica Quartermaine (Leslie Charleson) will gain one son back and grieve the other. Ned Quartermaine (Wally Kurth) will also be deeply affected.

General Hospital viewers can expect that Sonny Corinthos (Maurice Benard) will be in denial that Jason is really dead this time, especially since he has had the experience of being presumed dead when he wasn’t! Sonny will put his people and Damian Spinelli (Bradford Anderson) to work to try and find Jason, although they may need an assist from the Cassadines to find their way around. Ground penetrating radar may find him but it may take too long to save him! Plus there is a good possibility that he’s already dead.

General Hospital viewers know that Carly will lash out – and she will lash out at Britt, blaming her for Jason’s presumed death! After all, Carly reasons, if Jason hadn’t gone to Cassadine Island to help Britt find Liesl, he wouldn’t be dead! This will be a terrible thing to throw on someone who is as grieved at Jason’s likely death as she is! General Hospital spoilers say that Sonny will receive a disturbing call while Britt and Carly come face to face – so it may even be Britt who tells Carly the bad news!