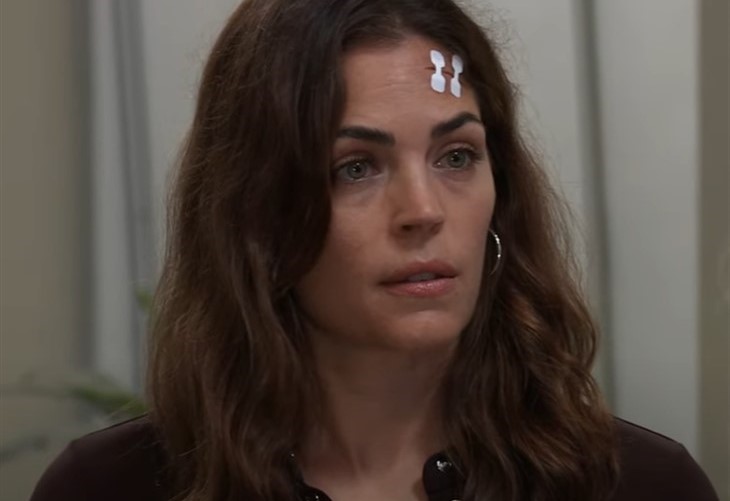 General Hospital spoilers and rumors tease that Britt Westbourne (Kelly Thiebaud) may not have Huntingtons’ Disease after all – it’s possible that Victor Cassadine (Charles Shaughnessy) may own the Canadian clinic where she was diagnosed. This may be revealed in future episodes of General Hospital!

General Hospital viewers will recall when Britt and Jason Morgan (Steve Burton) were hiding out in a lighthouse in Canada several months ago, they went to a facility called Canada Health Care. Britt was worrying more and more about the tremors in her hand, and while they were diagnosed as a postural tremor and not necessarily caused by the onset of Huntington’s Disease, they could be a symptom of it. Jason had encouraged Britt to get tested for it, but the test showed she had the genetic markers – it didn’t show she had it, only that she could develop it later on.

She saw a Dr. Gannon (Tim Herzog) there and when he brought out the test results she had been afraid to look! General Hospital viewers will also remember that Victor had Liesl Obrecht (Kathleen Gati) kidnapped a few months later, when she and Scott Baldwin (Kin Shriner) were going to a symposium on new cures for Huntington’s Disease – manufactured by Victor as a ruse to abduct Liesl! Victor had owned Crichton-Clark when he was head of the WSB, and he easily could own Canada Health Care, and Britt’s test could have been faked!

General Hospital viewers will recall that when Victor revealed himself to Liesl in the Cassadine compound in Crete, he told her he was responsible for getting her charges dropped in the Hague, where Peter August (Wes Ramsey) had framed her for his own crimes. Victor also told her he was responsible for getting her the job in the WSB clinic where Scott had taken Franco Baldwin (Roger Howarth) to seek treatment for his inoperable brain tumor. It’s obvious that Victor still has plants in the WSB, or at least agents who are still loyal to him.

Plus, General Hospital viewers will note another connection between Victor, Canada, and the WSB; several years ago Anna Devane (Finola Hughes) was kidnapped and taken to a clinic in Canada in order to lure Dr. Hamilton Finn (Michael Easton) there to rescue her, and was tasked with finding a cure to bring Cassandra Pierce (Jessica Tuck) out of her coma. She was intercepted on her way back to the WSB facility by a man with a Cassadine ring, later revealed to be Nikolas Cassadine (Marcus Coloma). Recently, Nikolas was revealed to have been working with Victor during that time!

General Hospital viewers know that Britt is devastated over the loss of Jason Morgan in the tunnel collapse on Cassadine Island. She really needs some happy news to cheer her up, because as General Hospital viewers will remember, she recently had told her mother that she was dying anyway, a reference to the Huntington’s Disease.

Again, she has not been diagnosed with the onset of the disease, only with the genetic markers that could cause her to develop it. With Victor possibly having been behind that diagnosis which could be as fake as the symposium in St. Lucia, she may not have the disease or it’s markers at all! Perhaps Liesl will convince her to be tested again, and she’ll receive happier news this time!