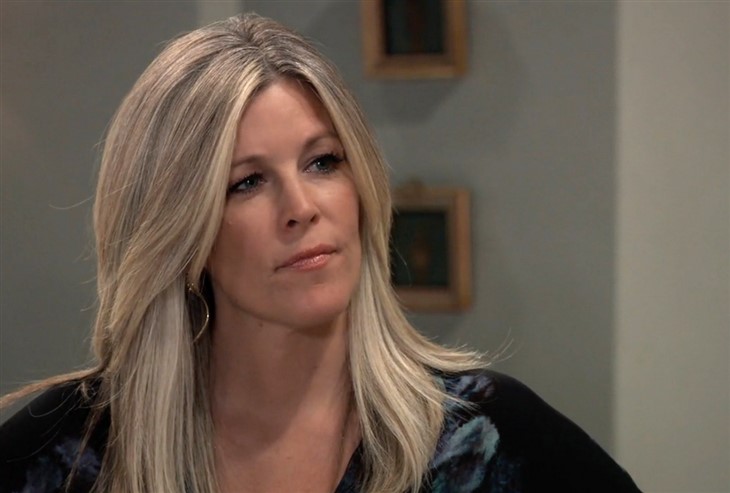 General Hospital (GH) spoilers for Monday, December 6, 2021, reveal Carly Corinthos wondering what on Earth Peter August could even be talking about with Nina Reeves.

Carly (Laura Wright) definitely heard Peter (Wes Ramsey) say something to Nina (Cynthia Watros) about her time in Nixon Falls with Sonny Corinthos (Maurice Benard), but did she hear that Nina and Sonny fell in love while he was going by the name Mike? Whatever she heard, Carly is very angry and refuses to give up until Nina spills it all.

Peter finds all of this to be quite amusing and wants Nina to fess up to what happened on the Pennsylvania side of the river and let Carly be the judge of how important their conversation really was.

Meanwhile, Nina and Sonny meet up later and discuss Nixon Falls and the time they spent together. And it looks like Willow Tait (Katelyn MacMullen) overhears it all. What will she do with this new information?

Despite Louise being under everyone’s nose right in the Quartermaine mansion, Maxie Jones (Kirsten Storms) still can’t bring herself to tell anyone the truth, including Valentin Cassadine (James Patrick Stuart), who really deserves to know what’s going on. Harrison Chase (Josh Swickard) mentions that there’s a secret going around, but Brook Lynn Quartermaine (Amanda Setton) stops him.

Drew Cain (Cameron Mathison) has also decided he wants to help Maxie and find Louise. Will he be another person to figure out Louise is right there in Monica’s house?

It looks like Victor Cassadine (Charles Shaughnessy) really wants to take over Wyndemere and cautions Ava Jerome (Maura West) and Nikolas Cassadine (Marcus Coloma) to not ask questions they don’t want to know the answers to. Ava warns her husband that he truly can’t trust his uncle, but will Nikolas listen?

Maybe he needs to listen to his mother, who finally appears on screen again now that Genie Francis is back on the show. She is sick of being holed up with Tad Martin Grey (Michael E. Knight) for their own protection and tells him she needs to get out of wherever they are now. Stay tuned to General Hospital to see how these stories play out.

B&B Spoilers: Finn Torn Between His Wife And His Birth Mother