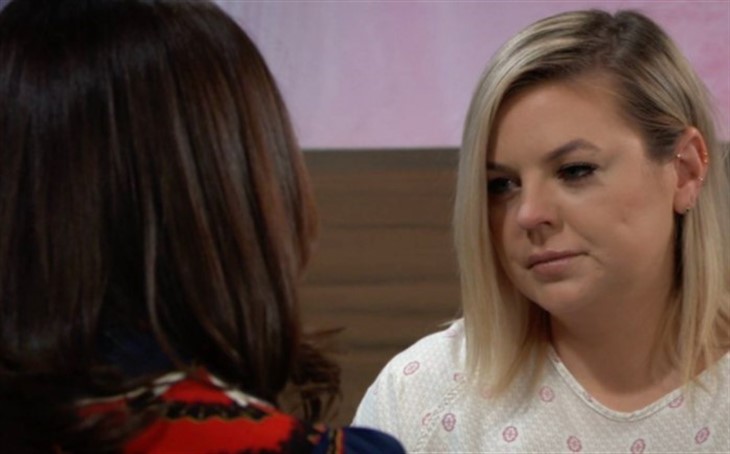 General Hospital (GH) spoilers reveal that Maxie Jones (Kirsten Storms) told everyone her baby was kidnapped. Meanwhile, Brook Lynn Quartermaine (Amanda Setton) is pretending the newborn is her child with Valentin Cassadine (James Patrick Stuart). During the week of June 14, Maxie tries to visit her baby but is blocked. Is Brook Lynn being honest about the reason, though?

GH spoilers reveal that Maxie was desperate to protect baby Lou from Peter August (Wes Ramsey). She is telling nearly everyone that nurse “Chloe Jennings” (Kimberly J. Brown) kidnapped Louise. However, the child was really handed to Brook Lynn, who will pass it off as her baby with Valentin.

So far, nobody seems to suspect that Brook Lynn was faking her pregnancy or that the newborn is actually Maxie’s child. There was a time when Valentin seemed suspicious. However, once he saw Louise aka “Bailey Quartermaine,” he was in love. Brook Lynn hasn’t even told her family the truth about the baby. This is going to get complicated, not just because of everyone being duped, but because of Peter.

General Hospital spoilers reveal that Peter and Hamilton Finn (Michael Easton) had a confrontation. Peter ended up at the bottom of the stairs with blood streaming from his head. Both Finn and Elizabeth Baldwin (Rebecca Herbst) confirmed the villain was dead. However, Ramsey’s exit hasn’t been confirmed yet so fans are waiting to see what happens next. Is Peter really dead, which means Maxie is separated from baby Lou for no reason? Or could Peter somehow still be alive? That’s the big question and eventually, we will get the answer.

The head writers previously teased to SOD that Maxie will have a difficult time coping this summer. We assume that as long as Peter is thought to be out there somewhere, Maxie and Lou will continue to be separated. However, it would be impossible for a mother to stay away from her child, especially if that child was nearby.

So, Maxie will try to visit Louise. However, Brook Lynn blocks it. She’ll probably say that Peter or his connections could be anywhere and watching their every move. She will remind Maxie that this is to protect Lou. However, is that the real reason or could Brook Lynn already be too attached? This goes beyond Brook Lynn’s original intention for faking the pregnancy, which was to get back the ELQ shares. She has already begun bonding over the baby with Valentin. It is confirmed that next week, the new parents will share a heartwarming moment. So, Brook Lynn might end up liking this unexpected family she’s created and won’t want to risk having it taken away.