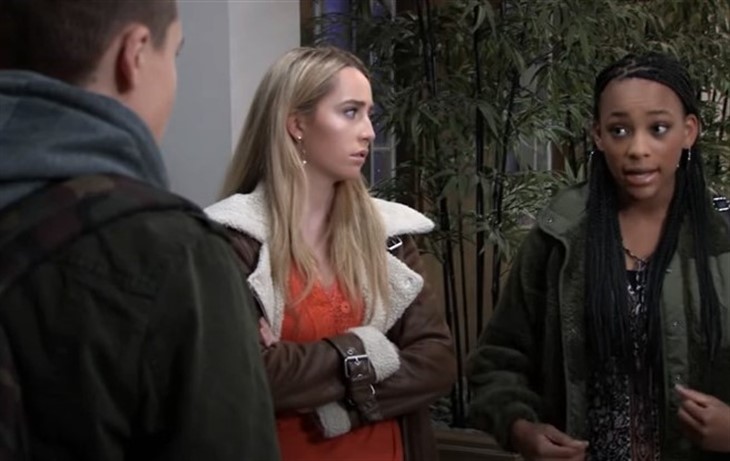 General Hospital (GH) spoilers show Cameron Webber (William Lipton), Josslyn Jacks (Eden McCoy), and Trina Robinson (Sidney Makayla) are close friends. They have been friends for years. They have been able to overcome many different issues together.

According to GH spoilers, Trina and Cameron supported Joss when she found out that her boyfriend Oscar Nero (Garren Stitt) had a cancerous brain tumor. They helped her to deal with her grief when Oscar died. Joss, Cameron, and Trina came together to help Dev Cerci (Ashton Arbab) when he needed help.

Dev needed to stay in the country because he could not go back to his home country of Turkey. Joss, Cameron, and Trina cared for Dev like they cared for Oscar. However Dev died when the Floating Rib was bombed. Trina, Joss, and Cameron had to lose another important friend when they lost Dev. Now they are facing new problems that are causing them much trouble.

Joss is trying to get into a college out of Port Charles. She wants to be on the best volleyball team that she can be on. She has been accepted at the local college in Port Charles. Joss has been injured while playing volleyball. She did not want to be a problem to her mother Carly Corinthos (Laura Wright) because she is dealing with issues surrounding Sonny Corinthos (Maurice Benard) mob organization.

General Hospital spoilers show Cyrus Renault (Jeff Kober) is trying to take over Sonny’s organization because Sonny has been declared dead. Carly did have the help of Jason Morgan (Steve Burton) but he has been framed for the death of Franco Baldwin (Roger Howarth) by Cyrus and Peter August (Wes Ramsey). Joss does not want to worry her mother with her problems. Joss has had the support of Trina and Cameron to help her deal with her problems.

General Hospital Spoilers: Cameron Is Dealing with a Loss

Cameron has been dealing with the loss of his step father Franco. He believes that Jason killed Franco. Joss and Trina have tried to get Cameron to see that Jason is innocent. Cameron had a confrontation with his younger brother Jake Spencer (Hudson West) over Jason.

General Hospital fans know Jake is Jason’s son and he believes his father is innocent. Elizabeth Webber Baldwin (Rebecca Herbst) is trying to keep her sons from having a problem with each other over Jason and Franco. Joss was upset that Cameron was not kind to his brother. Joss and Cameron are having trouble with their friendship because Joss believes in Jason’s innocence.

Trina had been dealing with problems of her own. She was upset with her father Marcus Taggert (Real Andrews) and Curtis Ashford (Donnell Turner) for trying to protect her in different ways. She has found a way to forgive them both. She has been accepted into the local college in Port Charles. She has the support of her mother Dr.Portia Robinson (Brook Kerr). Trina is worried about Joss and Cameron. She does not have as much to deal with as they do and is trying to help to them to stay friends.

General Hospital Spoilers: Cameron, Trina, and Joss are having Difficulties

Cameron has been accepted in college out of Port Charles and has a bright future ahead of him. Joss and Trina have good futures ahead of them as well. Can the three friends support each other to get the futures that they deserve? Can their friendships survive the different issues that are causing them trouble?