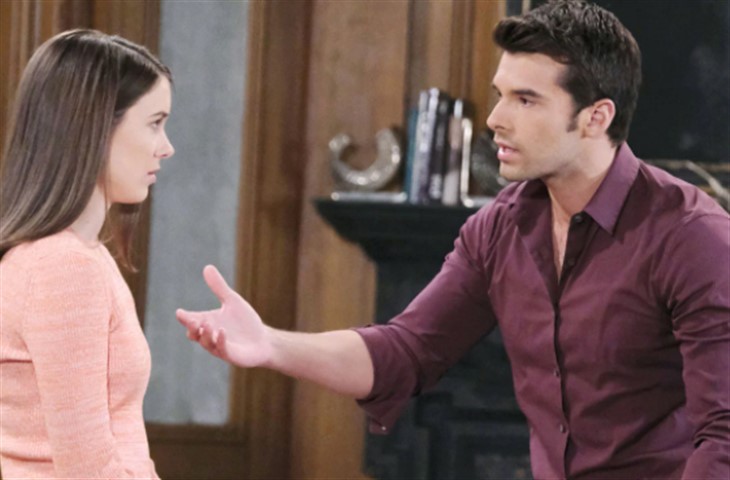 General Hospital (GH) spoilers and rumors tease that after what seemed like an eternity, Michael Corinthos (Chad Duell) and Willow Tait (Katelyn MacMullen) have admitted their true feelings for each other. As viewers know, Michael and Willow got married in name only in order to provide the best possible family unit for Wiley Corinthos (Erik and Theo Olsen) to ensure that they won custody over Nelle Benson (Chloe Lanier), who they knew would be a terrible parent and role model.

But they never would have gotten married if their partners hadn’t deceived them. General Hospital recaps reveal Harrison Chase (Josh Swickard) and Sasha Gilmore (Sofie Mattsson) pretended to have an affair in order to push Willow and Michael together.

General Hospital Spoilers – Michael Corinthos And Willow Tait Had No Reason To Believe That There Was A Chance With Harrison Chase!

Believing their respective relationships to be over, Michael and Willow bonded over their love for Wiley and began to fall in love. Michael and Willow even made love, but then they found out the truth and thought they owed it to Sasha and Chase to see if there were any feeling still there.

But time apart from each other led Michael to finally realize that he wasn’t in love with Sasha anymore, which gave Willow the courage to admit that she no longer loved Chase, even though they had been trying to make things work. But thanks to Peter August (Wes Ramsey), circumstances may bring Willow back into Chase’s arms on General Hospital, despite the fact she really wants to be with Michael.

Peter had been trying to poison Hamilton Finn (Michael Finn), but Harrison Chase ended up ingesting the deadly substance and is already feeling worse by the moment. His situation is bleak, and Chase is unable to now unable to feel his limbs. GH spoilers reveal Peter has promised to cure Chase as long as Anna Devane (Finola Highes) backs off on her plan to keep him from Maxie Jones (Kirsten Storms). But Chase is getting worse by the moment and may not have much time, assuming Peter even keeps his word.

General Hospital Spoilers – A Desperate Willow Tait May Agree To Marry Harrison Chase If She Believes Him To Be Dying!

It will certainly look bleak for Chase for the next several days, and he will only have one request likely. Before he dies, he will want to finally be married to Willow. Believing there is little hope, Willow may agree to Chase’s request, if only to grant his final wish or give him reason to keep fighting. It’s likely that Chase will eventually recover, leaving Willow married to the wrong man. Will she and Michael be able to work things out, or will this be the reason their new relationship will end before it even had a chance?

Will Willow be able to lift Chase’s spirits by agreeing to marry him. Will that be the last thing that Chase does or will he suddenly rally? Will Willow end up stuck in a marriage to a man she no longer loves, or will she and Michael finally have their chance at happiness.

Obligation and gratitude aren’t enough to build a marriage on, so stay tuned to General Hospital airing weekdays on ABC. And don’t forget to check back right here regularly for all your General Hospital news, rumors and spoilers.