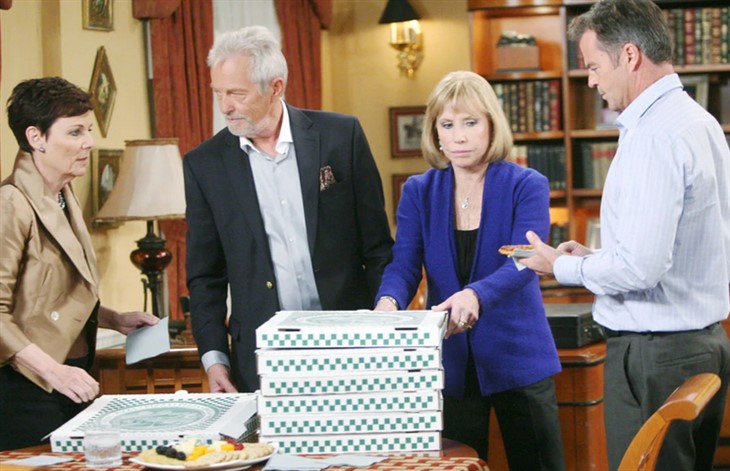 General Hospital spoilers reveal Thanksgiving spilling into the next week thanks to no new episodes of GH for two days — and the Q Thanksgiving is going to be a doozy this year.

There is nothing traditional about a Port Charles Quartermaine Thanksgiving at Monica’s (Leslie Charleson) house — except the pizza most years. This year, little Bailey Louise has a new baby daddy and the old baby daddy shows up to usher himself out but also leaves a warning. Valentin Cassadine (James Patrick Stuart) has already contacted a lawyer to get his ELQ shares back after believing he was legally defrauded.

Ned Quartermaine (Wally Kurth( tries not to panic after he realizes how badly Brook Lynn (Amanda Setton) screwed this entire thing up. She lied to Valentin to get ELQ back for the family, not thinking about what may happen when her lies come back to haunt her. And Ned only knows the half of it. As Brook freaks out, Ned tries to remain calm and then the family gets another surprise.

GH Spoilers – Out With The Old, In With The New…Again

Drew Cain (Cameron Mathison) shows up very much alive to see his family for the holiday after dropping the bomb on Sam McCall (Kelly Monaco) and Dante Falconeri (Dominic Zamprogna) that his brother, Jason Morgan (Steve Burton), is presumed dead once again. Considering the Qs all thought Drew was dead for two years, this is quite a shock. They have to deal with Drew being alive and the idea of Jason being dead after both brothers have already been presumed dead at one point or another.

Although everyone is thrilled to see Drew and heartbroken about Jason, Ned starts to see ELQ shares dancing in his head and realizes with Drew back, Valentin may not have as much of an advantage as he thought. Even Olivia (Lisa LoCicero) is ok with Ned thinking about ELQ before family.

But what about the pizza? Does something go wrong with the Quartermaine turkey to prompt a call for delivery? As Wally Kurth told Soap Opera Digest: “I can’t reveal that secret. I think that’s what people live for. Isn’t that the whole reason people watch the Quartermaine Thanksgiving? We’re not going to let anyone down. I’ll say that.” Stay tuned to General Hospital weekdays to see how the Qs end up with no turkey this year.