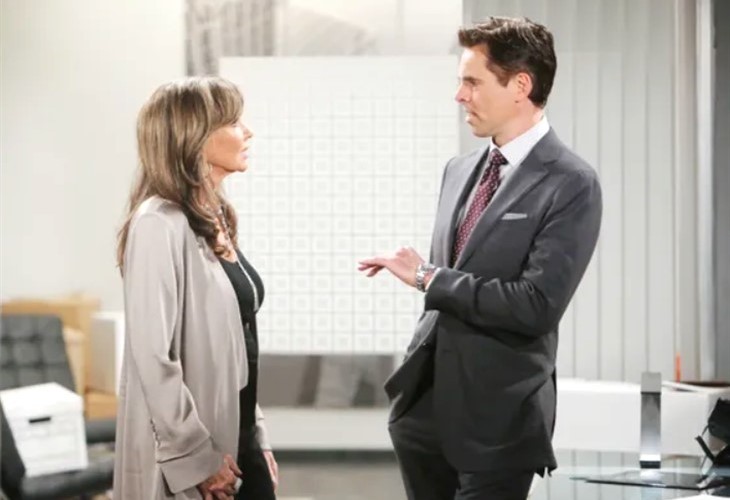 The Young and the Restless (Y&R) spoilers reveal that Jill Abbott (Jes Walton) returns after receiving an SOS call from Lily Winters (Christel Khalil). Jill will make a few bold moves, one of which will end up affecting Lily and Billy Abbott’s (Jason Thompson) relationship. Find out how Jill’s decisions and propositions could affect Billy and Lily.

The Young And The Restless – Lily Winters’ SOS Call

Y&R spoilers reveal that Billy played right into Victor Newman (Eric Braeden) and Adam Newman’s (Mark Grossman) hands. Ashland Locke (Richard Burgi) got in on the scheme as well. Despite Victoria Newman-Locke (Amelia Heinle) initially not wanting to get involved, she is now brainstorming her own scheme with Ashland. It’s getting to be quite complicated and more players will be thrown into the mix during the next few weeks.

Lily’s instincts told her Billy’s plan was going to go south and now it’s happened. However, Lily was unprepared for everything that has happened and she will continue to be blindsided by what’s to come. Lily took drastic action and called Jill for help.

When Jill returns, she slams Billy for putting ChancComm at risk the way he has. Not only does Jill berate Billy, but does it in front of Lily, which he doesn’t care for. Meanwhile, Jill is thankful that Lily had the good sense to call her, especially now that there is a pending lawsuit against ChancComm for libel. Co-executive producer and head writer Josh Griffith told Soap Opera Digest,

“Billy is confident he is able to salvage the situation without Jill’s help. Both Lily and Jill make no secret of not having confidence in his plan to turn things around and protect their company.”

The Young And The Restless – Downplaying Seriousness of Situation

The Young and the Restless spoilers reveal that Billy keeps trying to reassure Jill that it was unnecessary for her to come. Billy claims that he has everything under control. However, both Jill and Lily know that things are far from fine. In fact, Jill already has a solution in mind. However, it will significantly change things in more ways than one.

Jill has a solution to the problem but what she proposes is a bombshell. For one, we know that Jill proposes that Lily take her place. Then, Jill starts a bidding war, which will probably pit Newman-Locke against Newman Media. This would force Lily to work under either Ashland and Victoria or Victor and Adam. Lily wouldn’t like it but would probably make it work to her benefit. However, this could be a serious problem for Billy, especially since his exit is probably part of the negotiation package.

However, this could expose Ashland scheming with Victoria without informing Victor and Adam. In any case, Lily is going to have to make a tough decision and it could mean the end of her relationship.

“Jill presents Billy and Lily with a shocking proposal to end the tug-of-war with ChancComm, which may affect not only the company, but possibly Billy and Lily’s future as a company.”