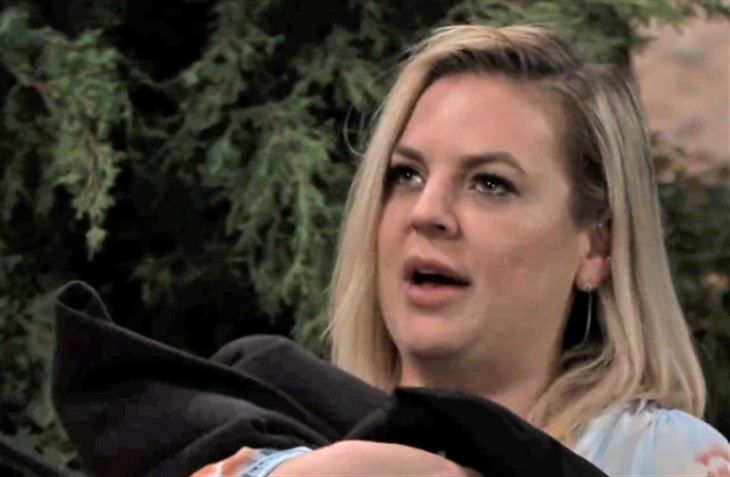 General Hospital (GH) spoilers reveal Maxie continuing to run around the woods with a very large newborn baby after just giving birth and having almost no medical care.

General Hospital Spoilers – Too Much To Take For Maxie Jones

Maxie (Kirsten Storms) has spent months plotting how she’s going to keep her daughter from the hissing madman she almost married and who claims to love her. Somehow she conceived a child with this man and General Hospital thought this was a good idea. (It wasn’t.)

But now Maxie has bonded with her baby after giving birth on the side of the road for the second time in her life. The first time, Peter (Wes Ramsey) delivered the baby with Maxie not even knowing that James was Peter’s nephew. Maxie just likes to keep it all in the family, doesn’t she?

GH Spoilers – Not According To Maxie Jones’s Plans

Maxie was never supposed to hold or see her baby as she was supposed to go straight to Brook Lynn (Amanda Setton), but the baby handoff is bound to happen when Brook tracks Maxie down in the woods and they proceed with their plan. The first part didn’t turn outright, but the second part better goes off without a hitch.

General Hospital spoilers indicate that Maxie doesn’t take any of the physical or emotional stress well and she might need more care than anyone can even imagine. Yes, she will fake being in mourning for her baby, so she will get care there, but nobody really knows the burden she is keeping.

Will Spinelli (Bradford Anderson) figure out this is what Maxie was talking about when she said she had a plan to save her baby or will he just help her mourn like everyone else is? Things are bound to go very wrong with this plot and also very wrong with Maxie.

Meanwhile, Maxie’s baby will be living in Monica’s (Leslie Charleson) house with Brook Lynn and Valentin (James Patrick Stuart) as its parents, and Maxie might very well lose her mind and try to take her baby back. What happens then if Peter is still hissing around and running loose after inevitably recovering from his tumble. Stay tuned to General Hospital weekdays to see how this story plays out.

The Bold And The Beautiful (B&B) Spoilers: Will Bill Stop Liam In Time?