The Bold And The Beautiful (B&B) Spoilers: Will Bill Stop Liam In Time? 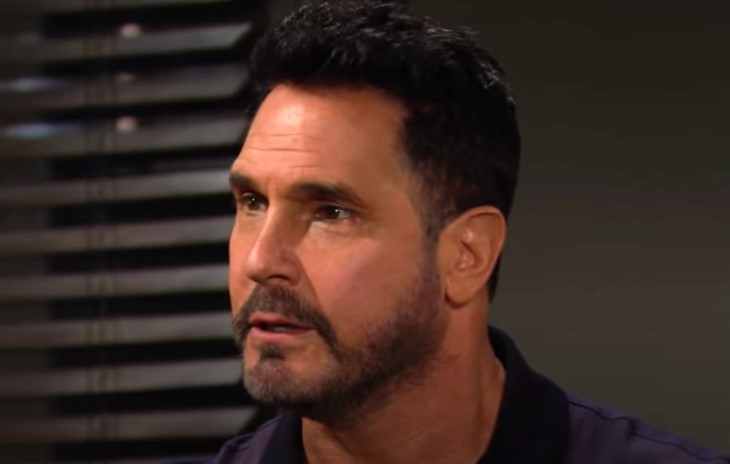 The Bold and the Beautiful spoilers for Tuesday, June 1, 2021, reveal Liam at the police station and Bill frantically trying to stop him from talking.

The Bold and the Beautiful Spoilers – Don’t Do It, Liam Spencer

Bill (Don Diamont) knows this is his last-ditch effort from stopping Liam from what he believes is the biggest mistake of Liam’s (Scott Clifton) life. (We think mistaking a mannequin for your wife is up there in the top 10 at least, if not number 1.) Besides, if Liam tells the cops what happened that fateful night Vinny died, then Dollar Bill will be in a whole lot of trouble too.

Lt. Baker continues getting frustrated as Liam clearly wants to tell him something important but Bill insists he has to speak to his son first. Bill makes the same tired argument that there was nothing they could do for Vinny (Joe LoCicero) and Vinny wasn’t such a good guy anyway, so why should anyone have to pay for killing him. Will this stop Liam from telling the truth or disgust him even more so that he lays it on even thicker during his confession?

Well, it looks like Bill spurs Liam on even more. Liam walked into that police station determined to do something and he finally does it. Watch as Liam explains it all to Lt. Baker in excruciating detail how he was driving along happily, took his eyes off the road for a split second, and the next thing he knew he hit someone.

That, someone, turned out to be Vinny Walker, the man who switched DNA tests to make it look like he was the father of Steffy’s (Jacqueline MacInnes Wood) baby so that Thomas (Matthew Atkinson) could be happy with Hope (Annika Noelle).

In Lt. Baker’s mind, that gives Liam motive to run him down. Liam still insists it was all an accident but has a whole lot of trouble answering some very basic questions, which makes Lt. Baker think Liam isn’t telling them everything. Is Bill in more trouble than he thinks? Stay tuned to The Bold and the Beautiful weekdays to see how this story plays out.