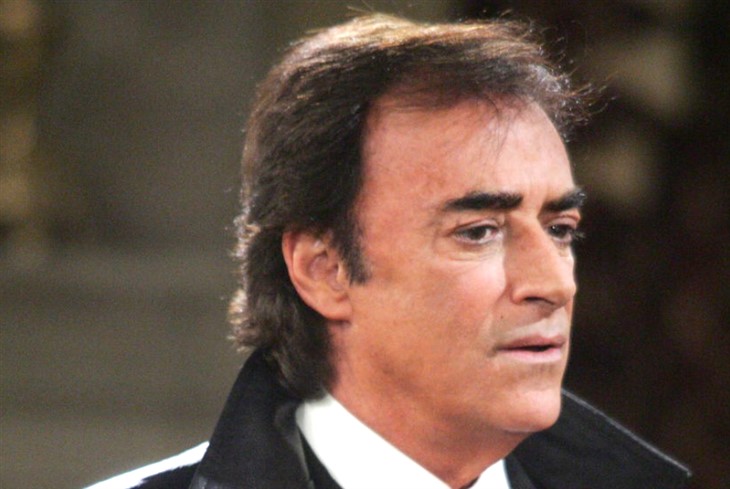 Days of Our Lives (DOOL) spoilers tease that Tony DiMera (Thaao Penghlis) will return to Salem and he’ll make EJ DiMera (Dan Feurreriegel) an offer he’ll have a hard time resisting in an upcoming episode of Days of Our Lives!

Days of Our Lives viewers will remember that Sami DiMera (Alison Sweeney) called EJ for a massive amount of money in a recent episode of Days of Our Lives. Kristen DiMera (Stacy Haiduk) had blackmailed Sami over her affair with Lucas Horton (Bryan Datillo), then locked them in the DiMera wine cellar. Kristen had hired Xander Kiriakis (Paul Telfer) as a hitman, and Xander, desperate for money, had agreed. But Sami offered Xander more than Kristen did, so he took Sami’s deal and didn’t kill her and Lucas.

However, EJ apparently put a stop payment on the wire transfer and it was gone when Xander checked his account again. Xander of course wanted to know what happened to the money and confronted Sami, but didn’t kill her and Lucas. Xander would much rather come by his funds legitimately these days, or mostly legitimately at least! But EJ was bound to wonder what was going on with Sami, and why she had been in so much trouble.

She hadn’t contacted him the whole time she has been in Salem, which this last time she wound up in jail being accused of Charlie Dale’s (Mike C. Manning) murder. Days of Our Lives viewers have to wonder why she didn’t call EJ about that! EJ shows up at the door unexpectedly and surprises and perhaps blindsides Sami a little bit. She is probably worried that either Kristen or Xander called him and ratted her out for sleeping with Lucas!

DOOL Spoilers – Have I Got A Deal For You

Tony arrives back in Salem around the same time as EJ. Days of Our Lives viewers will recall that Tony hasn’t been in Salem for a few months. He and his wife, Anna DiMera (Leann Hunley) again had been traveling, as Anna loves to do. But that doesn’t mean Tony hasn’t been in communication with Chad DiMera (Billy Flynn) in the meantime.

Both Tony and Chad are upset that yet again, an upstart DiMera who never met their father, Stefano DiMera (Joseph Mascolo) is at the helm of their father’s business. Days of Our Lives viewers will recall that first it was Stefan DiMera (Brandon Barash) and now it’s his twin Jake DiMera (Brandon Barash)! Tony wants EJ to help bring DiMera Enterprises back to what it was when their father was running it, and he and Chad both feel Jake is taking the DiMera out of DiMera!

Chad and Tony both want to give EJ an incentive to stay around Salem for a while, they need someone who actually knew Stefano to help give it that special touch. Longtime viewers of Days of Our Lives will recall that EJ is the son of Susan Banks (Stacy Haiduk) and Stefano, and one of the older guards of DiMera men. EJ knows that it might take a while to try and fix his marriage to Sami, and he also has his and Sami’s son Johnny DiMera (Carson Boatman) along. EJ hopes to give Johnny a taste of the business the way it should be, and perhaps begin grooming him in the ways of the DiMeras at DiMera Enterprises!

Stay tuned to Days Of Our Lives, and keep checking Days of Our Lives spoilers frequently for all the latest news, updates, and developments!

Days Of Our Lives (DOOL) Spoilers: Abe & Paulina Get Closer