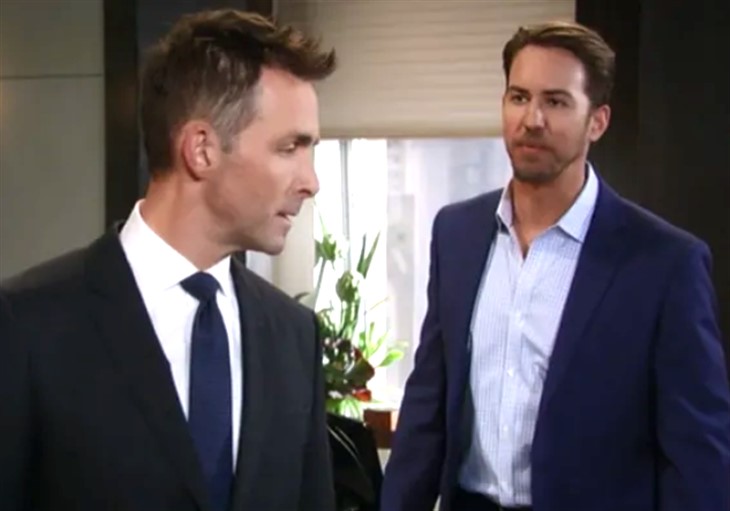 General Hospital viewers will recall that Peter has been deceiving both his mentor and his “mother”, Anna Devane (Finola Hughes), who as General Hospital viewers now know, is really his aunt. However, the mother-son dynamic is there for Anna, even after she figured out that her twin, Alexandra Devane Marick (Finola Hughes) was really Peter’s mother, not hers. Anna hadn’t been sure which memories were hers and which ones were Alex’s since they had been Patient One and Patient Two in the memory mapping/transfer studies performed by Dr. Arthur Cabot (Time Winters).

But when Alex came to town the last time – which appears to have been her last – she acted like Peter was hers, and dropped some pretty big hints to him which he acts like he may have already figured out. Anna need not worry that his knowledge that he is the son of an evil woman like Alex will make Peter any more devious and deceptive than he already is from his paternal side, however. Anna had hoped that nurture would win out over nature, but it doesn’t seem to be the case. Yes, Peter hated Cesar Faison (Anders Hove) enough to kill him – but Valentin has been watching over him literally since he was a baby, and being a father figure and mentor to him all of Peter’s life. That didn’t matter to Peter – he has been deceiving Valentin as well as Anna and possibly even himself!

It hurts Valentin that Peter has been deceiving even him, but if Peter’s level of evil is coffee with sugar, he’s headed for Faison’s level which is black coffee, and Peter is becoming darker by the day! Perhaps Valentin doesn’t quite want to admit that nature could win out over nurture either, because even though Valentin himself didn’t have a lot of nurture growing up, he sure doesn’t want to think he has Helena Cassadine’s (Constance Towers) nature in him! It is a difficult decision for Valentin to make but he knows Peter has to be taken down. Valentin and Anna both know that Peter has to be punished for his crimes, but Valentin certainly doesn’t want to take him out, although he needs to be brought to justice.

But if it comes to a standoff and Peter has degenerated to the level of evil that his parents did, and Peter’s got a gun, Valentin knows that he’ll have to take him out. Anna had to make the same decision with Alex, when she shot her in self-defense. Other lives were at stake too – she’d kidnapped Maxie Jones (Kirsten Storms) and shot her fiancé, Hamilton Finn (Michael Easton)! Valentin approaches Peter and tells him he cares about him – and he doesn’t want him to turn into Faison. But Peter at this point is already a loose cannon, and may not care about Valentin, Anna, or anyone else. Valentin will again tell Peter he cares about him, but he will do what he has to if necessary!