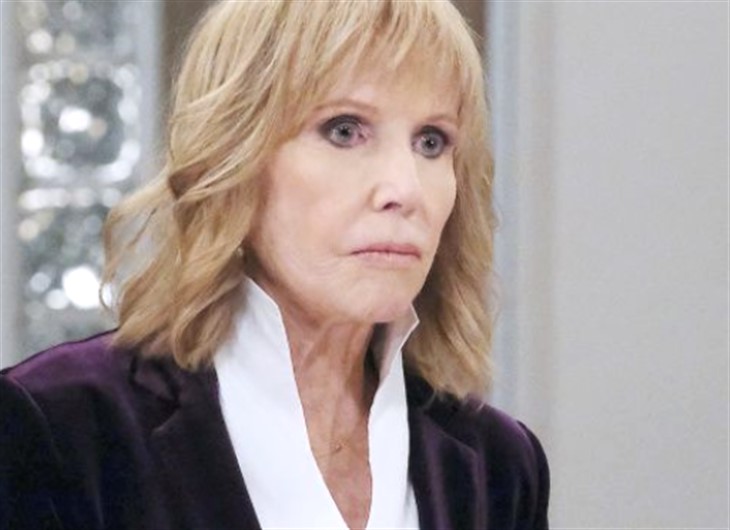 General Hospital (GH) spoilers tease that Leslie Webber (Denise Alexander) feels a great deal responsible for bringing Cyrus Renault (Jeff Kober) to General Hospital. Leslie had an affair years ago with Cyrus’ father, Gordon Grey, which led to the birth of Laura Collins (Genie Francis). Because of their familial connection, Cyrus has taken a great interest in Laura, as well as in General Hospital. But although he seems to genuinely want a familial relationship with Laura, his plans for the hospital are much less altruistic, and are in fact quite sinister.

Cyrus’ researchers have been developing a new pain medication at General Hospital that he wants to make the primary pain relief medication the hospital uses. But as Dr. Britt Westbourne (Kelly Thiebaud)discovered when she researched the medication, it is highly addictive. What’s more, because it’s a drug developed by Cyrus’ employees, he would profit from it’s use, so it an ethical issue as well. Leslie attended the most recent board meeting at General Hospital where Cyrus introduced the new drug. Leslie was able to get an actual vote delayed for a few days. IN the meantime, her next stop was her former nemesis, Monica Quartermaine (Leslie Charleson).

GH Spoilers – Can Monica Quartermaine And Leslie Webber Work Together To Help Save General Hospital?

While they still don’t like each other, Monica and Leslie’s main reason for conflict was Dr. Rick Webber (Chris Robinson) who died years ago. While they will most likely never be friends, they will likely be able to put any bad feelings aside if it means they can help General Hospital. But what can they do? The most likely scenario is to get all board members up to speed on Cyrus’ new drug. Hopefully they can get Britt to verify to addictive properties so they can share that before it comes to a vote. Monica is no longer an employee of General Hospital, thanks to Cyrus, but she will most likely do as much as she can to save it. But can these two do enough to turn the vote against Cyrus’ new drug?

Can Monica and Leslie make a difference with the hospital board? Will they be able to prevent Cyrus’ drug from getting approved? And will they realize that they might just like each other a little bit? Everyone has a part to play in the war against drugs in Port Charles, so stay tuned to General Hospital airing weekdays on ABC. And don’t forget to check back right here regularly for all your General Hospital news, information and spoilers!