Steffy Intervenes In An Argument Between Liam And Finn Over Her 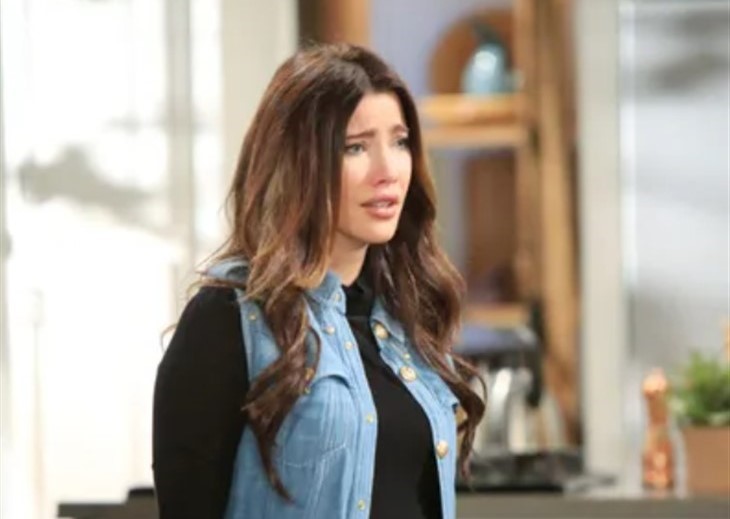 The Bold and The Beautiful (B&B) spoilers tease that in Los Angeles Steffy Forrester (Jacqueline Macinnes Wood) will intervene in an argument this week on The Bold and The Beautiful; she will need to take action when she finds Liam Spencer (Scott Clifton) and Dr. John Finnegan (Tanner Novlan) fighting over her! It would seem the two of them are competing for her favor!

The Bold And The Beautiful Spoilers – Dr. John Finnegan Laid Down The Law To Liam Spencer

Viewers of The Bold and The Beautiful will recall that Finn laid down the law to Liam, with a whole new set of boundaries where Steffy is concerned! Liam is not to have any contact with Steffy outside of what a divorced couple with a child normally has when they are co-parenting their child, or in this case, children once Steffy’s baby is born. Liam, naturally, didn’t like the idea of boundaries of any sort since he is used to coming and going as he pleases!

Finn has had to educate Liam on normal co-parenting schedules and custody arrangements. Liam bucked at the idea of any kind of legalities, although Finn agreed it wouldn’t necessarily have to be something set up in family court as long as everyone agreed on the rules and kept to them! Having something in writing and notarized wouldn’t hurt, however. Again Liam would balk at that notion, after all, everything has always been verbal and never caused a problem before. After Finn had made his intentions clear to Steffy, she had made her case clear about her feelings for Liam to Finn and Hope together, and she does not love Liam any more, she loves Finn! Steffy has moved on, and hopes Liam can finally move on and stay moved on with Hope, although Hope is having a very difficult time with his betrayal!

Undoubtedly reacting to the new set of rules and new ways of doing things that Finn has demanded, Liam starts currying Steffy’s favor as far as time with Kelly Spencer (Avalon and Colette Gray) is concerned. Finn’s preferred time schedule doesn’t line up with Liam’s, and the two start to argue. It seems that Liam wants to be a time hog and Finn doesn’t want to give him that much time. Finn doesn’t want to stress Steffy so he tries to settle things with Liam himself, and Liam pushes Finn to ask Steffy to be the judge of how much time Liam should spend with THEIR daughter and WHEN!

Steffy hears the two of them and gets between them. She tells Liam that Finn is a doctor – he is on call. Finn is the new man in the house and will legally be Kelly’s stepfather as well as the new baby’s once they are married. Liam must adjust his schedule to Finn’s, because Finn doesn’t want Liam to spend time with Kelly and Steffy at the same time unless he is there, and Steffy tells Liam she has agreed to this. Steffy knows that the only way to ensure Liam doesn’t take a mile when he’s given an inch is for her and Finn to present a united front! Liam can just get glad in the same pants he got mad in!