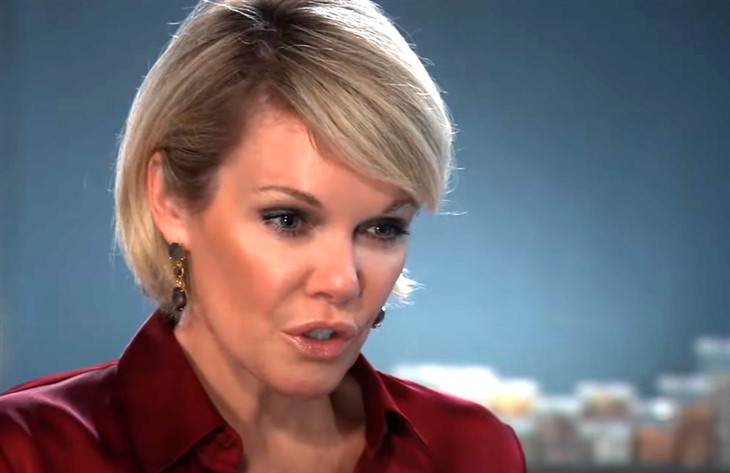 General Hospital (GH) spoilers for Thursday, October 21, 2021, reveal Ava Jerome thinking she has the upper hand and going for what she wants.

Ava Jerome (Maura West) has spent the last seven years trying to get true custody of her daughter, Avery (Ava and Grace Scarola), as Carly (Laura Wright) more than Sonny (Maurice Benard) has laid claim to the little girl as her own. When Sonny was presumed dead, she had all rights to Avery, but now that he is alive, she doesn’t want to be just the parent with visitation rights anymore.

On Thursday, she tells Sonny just that but will he listen? And does Ava have real leverage now that she knows Sonny and Nina Reeves (Cynthia Watros) had a relationship in Nixon Falls that he clearly doesn’t want Carly to know about?

Meanwhile, Nina has a big idea when she is talking to Phyllis (Joyce Guy). Does she think she knows a good way to keep her in town? Does Ava want to sell Charlie’s Pub?

Carly Corinthos is a bit miffed when Willow Tait (Katelyn MacMullen) explains to her why she and Michael (Chad Duell) are going to allow Nina to see Wiley. They don’t want to invite trouble before it’s absolutely necessary, but Willow has no idea that Michael is already doing it by bribing a public official.

While Michael is on his bribery kick, he is not all that concerned with ELQ, but everyone else seems to be. Brook Lynn (Amanda Setton) feels she did something right by trying to get Austin’s (Roger Howarth) medical license taken away, but Austin is not about to let this go and he tells her if she wants to play dirty, then bring it on. Monica Quartermaine (Leslie Charleson) just wants everyone to call a truce.

She might want to advise Ned (Wally Kurth) and Olivia (Lisa LoCicero) to do the same. While Olivia continues to live in her own world about Leo because to her, living in your own world is conducive to success in society, Ned wants her to stop being delusional and see reality. Stay tuned to General Hospital weekdays to see how these stories play out.

The Family Chantel Spoilers: Is The Show Real?