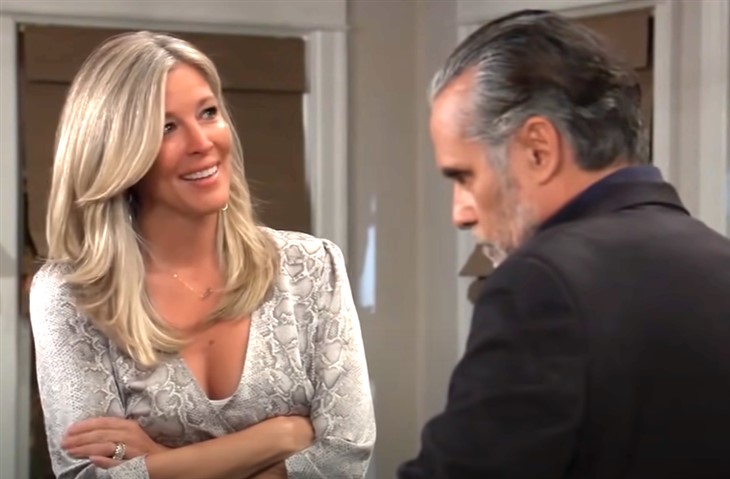 General Hospital (GH) spoilers tease that in Port Charles, NY Carly Corinthos (Laura Wright) was thrilled to see that her husband, Sonny Corinthos (Maurice Bernard) was alive and well. Sonny had been living in a small town called Nixon Falls with amnesia. Sonny went by the name “Mike” and fell for Nina Reeves (Cynthia Watros) while he was gone. Carly, for her part, began to rely on her best friend Jason Morgan (Steve Burton) more and more, and they too fell in love. So although the love between Sonny and Carly is as strong as it ever was, both of them have unresolved feelings for someone else as well.

Sonny eventually asked Jason about his relationship with Carly. Although they had agreed to be married in order to strengthen the Corinthos Organization with the Five Families, the marriage was going to be real. Both Jason and Carly admitted they were in love and they would have acted on it had Sonny not arrived when he did. While Jason and Carly are committed to returning to the status quo, there are still lingering feelings. Sonny wasn’t pleased to find out just how close Carly and Jason had gotten, even though he understood how it happened.

General Hospital Spoilers – Carly Corinthos has no idea that “Mike” fell in love with Nina Reeves!

Although Carly is well aware that Nina knew where Sonny was the whole time, she hasn’t discovered just yet that “Mike” and Nina were well on their way to becoming a couple. When she does, she will likely be just as upset as Sonny was to find out about her and Jason. These factors will likely remain in play until those feelings for other people can be sorted out. Sonny and Carly have reconciled of course, but they still have a long way to go.

GH Spoilers – Sonny Corinthos Can’t Get Nina Reeves Out Of His System.

Sonny would like nothing better than to just move on. But every time he runs into Nina, it’s obvious that there is still something between them. Whether Sonny wants to admit it or not, a part of him still loves Nina. And as things move forward, those feelings will certainly express themselves. As for Carly, even though she tried to steer Dr. Britt Westbourne (Kelly Thiebaud) back in Jason’s direction, a part of her still, and likely always will, love Jason.

Only time will tell if Carly and Sonny can get back to where they were before Sonny disappeared. Their feelings for other people will have to be dealt with. Whether that means they need some time apart as they explore those feelings remains to be seen. But Sonny and Carly have been through quite a bit and more than likely they will get through this as well, eventually.

Can Carly and Sonny just go back to the way things were? Or do they need some time apart to explore their feelings for other people? Could Sonny and Nina become a couple, even temporarily? Anything can happen in Port Charles, so stay tuned to General Hospital airing weekdays on ABC. And don’t forget to check back right here regularly for all your General Hospital news, information and spoilers!