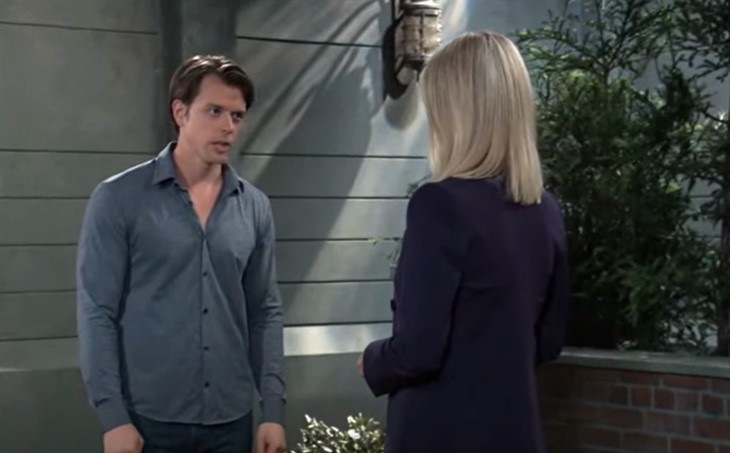 General Hospital viewers will recall that like all of Sonny Corinthos’ (Maurice Benard) family, Michael is angry-very, very angry! Michael as well as everyone else in the Corinthos family blames Nina Reeves (Cynthia Watros) for not speaking up sooner when she recognized Sonny at the Tan-O in Nixon Falls. General Hospital viewers will remember that Michael and the rest of the family grieved Sonny for nearly a year after he disappeared in the icy water after shooting Julian Jerome (William DeVry).

A bridge had broken apart underneath them, and while Julian’s body surfaced right away, nothing of Sonny or his clothing or belongings could be found. Jason Morgan (Steve Burton) searched fruitlessly for Sonny for months, with even the WSB getting involved at one point. General Hospital viewers will recall he finally was found by a deputy near Nixon Falls in a snow bank, minus his jacket, wallet, cell phone or anything to identify him with except his late father Mike Corbin’s (Max Gail) watch.

General Hospital viewers know that Michael is rather much in a quandary regarding his son with Nina’s late daughter Nelle Benson, (Chloe Lanier) Wiley Corinthos (Kyler and Caleb Ends). During the months that Sonny was presumed dead, after Jasper “Jax” Jacks (Ingo Rademacher) took advantage of a certain situation to blackmail him into it, Michael allowed Nina to have visitation with Wiley, usually either in the gatehouse on the Quartermaine property where Willow Tait (Katelyn MacMullen) lives or in the main Quartermaine mansion. He has not allowed her to visit with Wiley totally unsupervised, although no one is usually right there in the room. He has allowed modicums of privacy.

When Sonny came back and Michael found out Nina had known for several months (thanks to his mother) he was ready to stop the visitations. But Willow convinced him that suddenly cutting off Nina from Wiley was not in his best interests – he’s old enough to understand death now, and he could easily think she died and no one’s telling him! He just got Grandpa Sonny back, and now he’s lost Grandma Nina? General Hospital viewers know that just doesn’t track!

General Hospital viewers have noticed there is still attraction between Sonny and Nina, even though Sonny’s denying it and Nina’s having a hard time forgetting her romance with “Mike”! General Hospital viewers know the two came pretty close to “doing the deed” in Nixon Falls before Peter August (Wes Ramsey) showed up and torched the Tan-O with Nina and Phyllis Caulfield (Joyce Guy) tied up in it! Sonny told Nina to stay away from his family, but that is a little difficult to do since Wiley is his family and hers! They did touch a little bit on that fact and Sonny backed down a little. It becomes apparent that there is a soft spot in Sonny for Nina and a bond between them they cannot hide, and Michael picks up on it. It is obvious to General Hospital viewers as well.

Michael decides to use this as a bargaining chip to avoid the inevitable clash between his mother, Carly Corinthos (Laura Wright) and Nina over Sonny! General Hospital viewers will recall that she’s already had to be physically restrained from tearing Nina limb from limb at the Quartermaine mansion, with Jason Morgan (Steve Burton) having arrived just in time! Michael makes Nina a bargain – in order to keep seeing Wiley, she has to stay totally away from Sonny! If she sees Sonny around town, she needs to go the other way and if he approaches her, she needs to retreat! This is Michael’s plan to kill whatever might be left emotionally between Nina and Sonny, and he hopes it works! But General Hospital viewers know that the heart wants what the heart wants, and it may backfire!