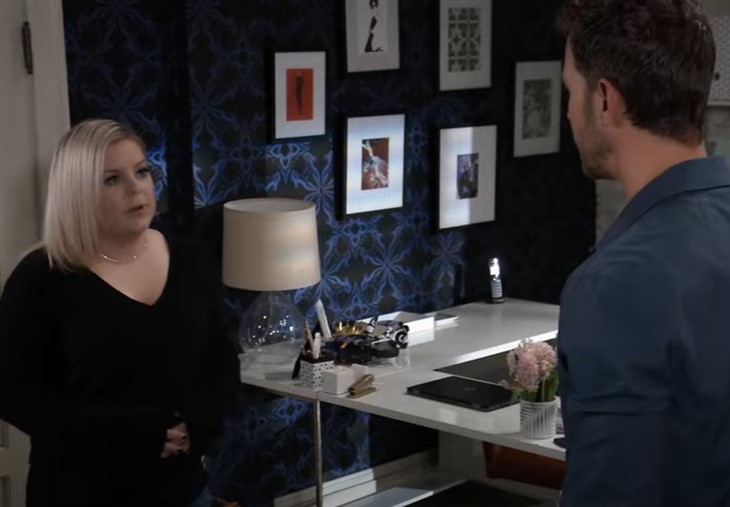 General Hospital (GH) spoilers tease that Maxie Jones (Kirsten Storms) hasn’t seen Peter August’s (Wes Ramsey) dark side for herself. Until recently, Maxie was blissfully unaware of Peter’s true criminal past. Their romance even led to Maxie’s pregnancy and they had planned to be married. But at the wedding ceremony, Peter’s past was revealed and Maxie was rushed to the hospital before the ceremony could be completed. Now fully armed with the truth, Maxie knew she had to do whatever she had to keep their baby away from Peter.

Although Peter hasn’t seen that side of her, Maxie isn’t above playing dirty to get what she wants. Maxie has done some awful things in the past, but she grew up and been a successful career woman in recent years. But in order to save her baby, Maxie has come up with a plan that taps into her darker days. Maxie plans to let the world believe that the baby died in childbirth when she is actually planning to let Brook Lynn Quartermaine (Amanda Setton) pass the child off as her own until Peter is no longer a threat, either by being in prison or dead. It’s a risky plan that could go wrong in many different ways but what if she actually succeeds and Peter believes the baby is dead? Has she really thought that through?

GH Spoilers – Peter August, May Go Totally Off The Rails If He Believes His Baby Is Dead?

If Maxie is successful, then she plans to mourn the baby with Peter. But Peter has barely been holding it together in recent weeks. Maxie may not have considered the possibility that Peter may hold her responsible for the baby’s death. He may believe that if Maxie had just let him stay with her all this time, then their baby would still be alive. It’s at this point that Peter may truly show his true self to Maxie. Could he threaten to kill her, or force her to make another baby with him? He already has plans to get Maxie and the baby out of town, there is no reason to believe that he won’t abduct Maxie and keep her prisoner. And truthfully, he might become angry enough to try to kill her. Maxie is going to have to use every trick in the book just to stay alive. Would she go as far as to sleep with him so that he believes they have a chance? Does Peter even care at this point?

Will Maxie and Brook Lynn’s crazy plan succeed without the help of Dr. Britt Westbourne (Kelly Thiebaud)? Will Bobbie Spencer (Jacklyn Zeman) step in to save the day? But if Peter believes his baby is dead, will he drop the last bit pretense he has been holding on to? Should Maxie fear for her life? Is Peter’s reign of terror coming to an end? The bad guys always fall hard eventually in Port Charles, so stay tuned to General Hospital airs weekdays on ABC. And don’t forget to check back right here regularly for all your General Hospital news, information and spoilers!