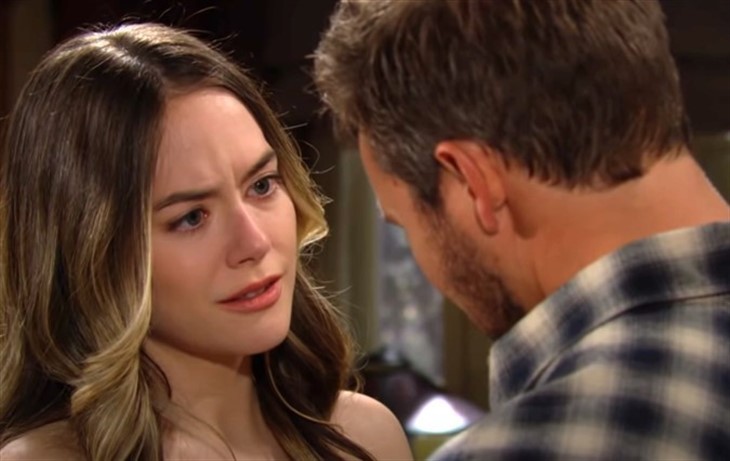 The Bold and the Beautiful (B&B) spoilers for Monday, May 24, 2021, reveal a confused Hope once again wondering what’s wrong with Liam

The Bold And The Beautiful Spoilers – Liam And Bill Did WHAT?

It came as a shock to Hope (Annika Noelle) and the audience when Liam (Scott Clifton) actually told the truth for a change. He couldn’t help himself anymore and after months (at least in real-time, not soap time) of keeping the circumstances behind Vinny’s (Joe LoCicero) death a secret, he unburdened himself on Hope and she could barely believe he wouldn’t even get help for a dying man on the side of the road.

Then, Liam explained what really happened and how Bill (Don Diamont) took charge after Liam passed out, leaving the scene of a deadly accident and covering the whole thing up. She knows she can’t blame her husband but she is furious with Bill. Hope is determined to let her father-in-law know just how she feels but she needs to calm Liam down first. He does not want her going to Bill because then Bill will find out that Liam opened his mouth and couldn’t keep their secret any longer.

Now that Hope has been clued into what Liam has done, Wyatt (Darrin Brooks) might be next. When he visits his dad and sees Dollar Bill and Thomas (Matthew Atkinson) arguing he can also tell his father is agitated. When he sees Hope show up next, things start making sense for him.

Bill and Liam started acting strange right after Vinny’s death and have continued acting strange to this day. That has to have something to do with what’s going on, right? Could they have been the ones who ran Vinny down? If so, why wouldn’t they speak up if it was an accident? That makes Wyatt think if his brother and father were behind this and felt the need to lie for months, maybe it wasn’t an accident after all. Will Wyatt do some digging and then learn something about Vinny’s death nobody yet knows? Stay tuned to The Bold and the Beautiful weekdays to find out.