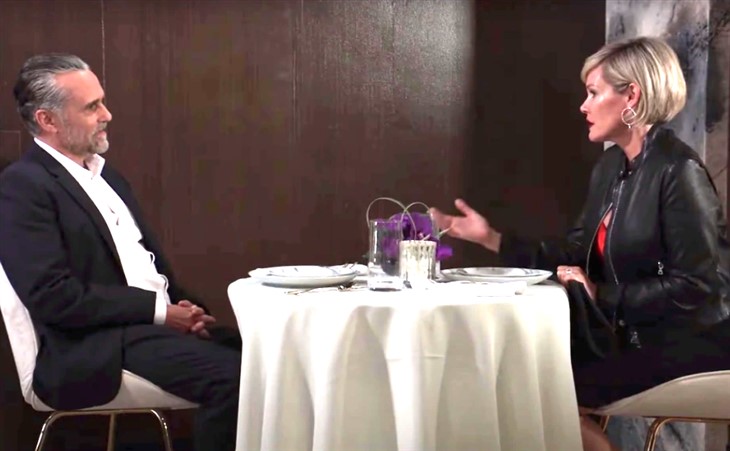 Ava Jerome (Maura West) thought things were too easy when Sonny Corinthos (Maurice Benard) agreed to give her more time with Avery (Ava and Grace Scarola) without her having to resort to out-and-out blackmail. She didn’t even know what to say or do so she tried to get away with him as quickly as possible. But he came after her and now he wants something.

It looks like that something will be Charlie’s Pub. After all, Ava owns it and Phyllis (Joyce Guy) needs a new bar. And if she owns Charlie’s she could call it The Tan-O Too, give him some of Julian’s (William deVry) old flannels and he can serve up some beets and Corinthos Coffee right alongside his oldest daughter, Kristina (Lexi Ainsworth). What could be better?

Even Nina (Cynthia Watros) seems to think this is a fine idea. Why didn’t she think of it herself since she does have all this money to spare? Oh well, either way, she gets to have Phyllis in Port Charles.

Spencer (Nicholas Chavez) is definitely not alone for his arraignment. Josslyn Jacks (Eden McCoy) and Cameron Webber (Will Lipton) show up to support him, but he needs more than just moral support from friends. He also needs a father and Kevin (Jon Lindstrom) tries to convince Nikolas (Marcus Coloma) to be one.

Kevin has a message from Laura (Genie Francis) and Nik’s mother wants him to make sure his son does not end up in jail? Will Nikolas listen or will Spencer linger behind bars and be on his own.

General Hospital Spoilers – Over In Greece

While there’s no word yet on Valentin Cassadine’s (James Patrick Stuart) condition, Anna Devane (Finola Hughes) is presented with a proposition she may not be able to turn down. Meanwhile, Robert Scorpio (Tristan Rogers) tries to get as much information out of Victor Cassadine (Charles Shaughnessy) as he can, but has no luck in the matter.

Jason Morgan (Steve Burton) and Britt Westbourne (Kelly Thiebaud) also arrive in Crete to find Liesl Obrecht (Kathleen Gati). Will the pair have any luck at all? And will they kill Peter (Wes Ramsey) for all the fans out there who really, really want Peter dead? Stay tuned to General Hospital weekdays to see how these stories play out.