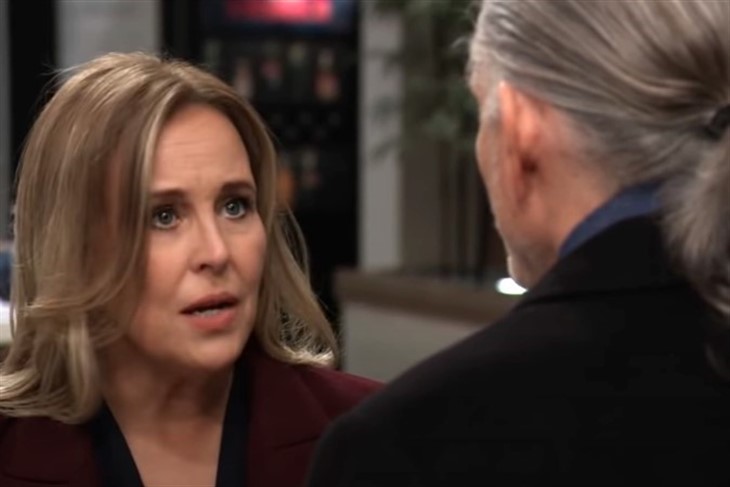 General Hospital Spoilers – The End Of The Road For Cyrus Renault

We saw Peter (Wes Ramsey) take a tumble and allegedly die, so it’s the end of the road for him — for now. Will Cyrus’s (Jeff Kober) undoing come next now that he’s shot, bleeding, and disheveled committing crimes out in the open for all to see?

He’s created a full-blown hostage situation in Port Charles with the cops surrounding Portia’s (Brook Kerr) house and the mayor inside trying to do some good. That mayor also happens to be Cyrus’s sister and she continues to do her best to appeal to his better angels and that sad love he has for his mother who doesn’t seem to love him back.

But Cyrus doesn’t want to hear it. He has demanded and makes threats, saying whatever ends up happening to him will happen to Laura (Genie Francis), so nothing bad can happen.

Over at GH, Maxie (Kirsten Storms) cries as she watches Brook Lynn (Amanda Setton) hold her baby and pass her off as her own. She also watches as Valentin (James Patrick Stuart) marvels over having a brand-new daughter. It’s hard not to feel bad for both Maxie and Valentin, but this is what Maxie feels she has to do. If only Finn (Michael Easton) and Liz (Rebecca Herbst) knew so they can tell her Peter is dead — for now at least.

They do tell her she will never have to worry about Peter again but they are determined to keep what happened to Peter a secret.

Britt (Kelly Thiebaud) seems to still be in a safe house waiting to see if Jason(Steve Burton) returns, but instead, she has a surprise visitor. Could her mother have found her? We haven’t seen Liesl (Kathleen Gati) for a while and she has to be looking for her daughter.

Meanwhile, Jason is lingering in a jail cell telling Carly (Laura Wright) all she has done wrong. Will Maxie’s recording finally set him free? Stay tuned to General Hospital weekdays to see how these stories play out.