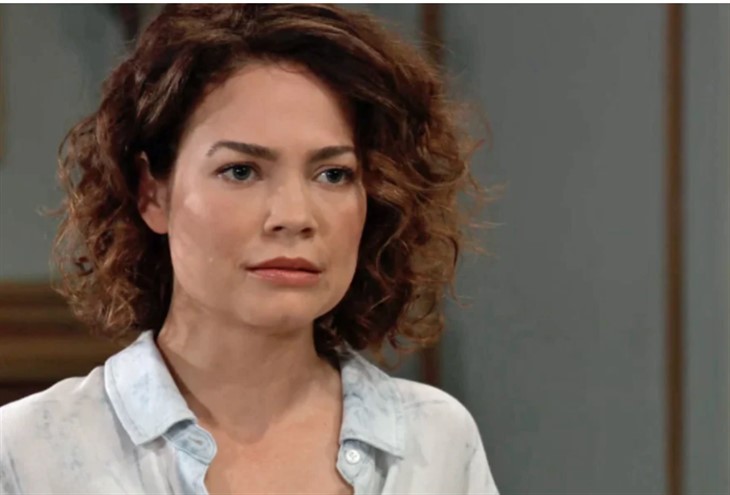 General Hospital (GH) spoilers tease that Elizabeth Baldwin (Rebecca Herbst) will do anything to protect her family- but does that include a cover-up of the murder of someone better off dead? The answer to that question will be revealed in upcoming episodes of General Hospital!

General Hospital viewers will recall that Elizabeth is the one to discover Peter August (Wes Ramsey) bleeding out at the bottom of a stairwell at General Hospital. He had been there for at least two hours, according to the timeline shown at the beginning of the episodes each day already by the time he was discovered, and she had rushed to check his pulse. Peter’s plan had been to have fake Nurse Chloe Jennings (Kimberly J. Brown) induce Maxie’s labor and deliver baby Louise August (unknown infant actor) and then flee to parts unknown under assumed names. The fake passports could be seen having likely fallen out of Peter’s pocket as he tumbled down the stairs, near his hand. The first assumption that viewers would have is that Elizabeth might be worried that Cameron Webber (William Lipton) took revenge upon Peter for killing his beloved stepfather Franco Baldwin (Roger Howarth).

However, Cameron was not seen anywhere around General Hospital, and he couldn’t have known that Peter was there unless he was stalking him. Speaking of Peter at General Hospital, why was he there, and trying to take the stairs loaded down with his travel bag on the way to Pautuck, New York where fake Nurse Chloe and Maxie and Louise were to be waiting for him? The answer may be to also access the safe where Nurse Chloe appears to have locked up the vials of antidote for the toxin that Harrison Chase (Josh Swickard), possibly wanting to make sure nothing would be left to save Chase as a final assault against Valentin Cassadine, (James Patrick Stuart) Anna Devane (Finola Hughes) and Dr. Hamilton Finn (Michael Easton) who had been collaborating to make sure Peter was brought to justice for his crimes!

General Hospital viewers will recall that once Peter landed, the fake passports could be seen but where was his bag? He went down so fast it is possible that from the view he is shown in, he could have landed on top of it. Anna Devane had gone to his office on the top floors of the Metro Court asking him for another dose of antidote after Chase again had relapsed. Peter informed her he had sold “The Invader” and he wouldn’t have an office there anymore. Remember, the timeline from Peter at the bottom of the stairs until either his death or his severe injury counted backward starting from the first General Hospital episode from when he was seen tumbling down. Peter will be backed into a corner on June 2, and on June 3 Finn will confront Peter while Elizabeth will lay into Valentin! Elizabeth does not share any family with Valentin but Finn is the father of her niece,

Violet Barnes (Jophielle Love). If Finn finds out from Anna that Peter wouldn’t give her any more antidote and Peter’s on the run in the hospital, it might be Finn that loses it and pushes Peter down the stairs – and he might grab his bag if he hasn’t fallen on it to look for vials of antidote! Or Peter might have broken all the bottles of an antidote if he does indeed have them in his bag and he fell on it! Elizabeth might be laying into Valentin taking out the issues of Peter’s crimes on him. If Peter does manage to survive or not, Finn might be the family member that she covers up for to protect Violet as well as the rest of her family! Do we know Peter is hard-headed but is he hard-headed enough to survive a fall like that?