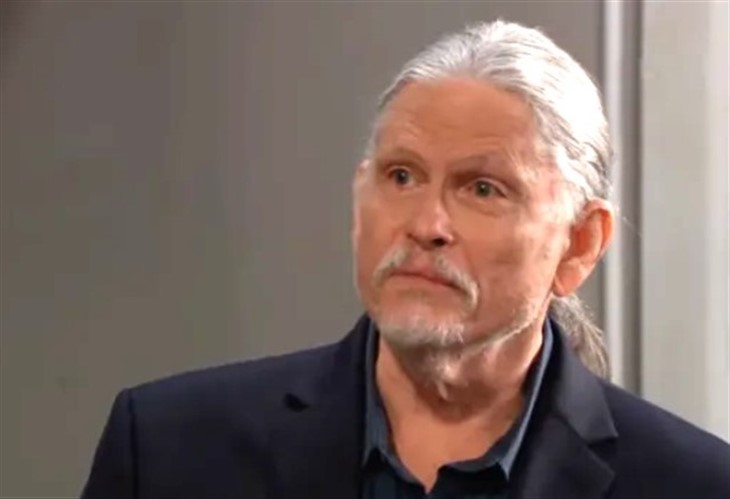 General Hospital spoilers tease that Cyrus Renault (Jeff Kober) could be fake Nurse Chloe Jennings’ (Kimberly J. Brown) father, and this could be revealed in future episodes of General Hospital!

General Hospital Spoilers – Fake Nurse Chloe Jennings Had Access To A Safe With Vials Of – Something!

General Hospital viewers will recall that Fake Chloe had access to a safe with vials of something – possibly the antidotes for the toxin that Peter August (Wes Ramsey) poisoned Harrison Chase (Josh Swickard) with. For that matter, there could have been more doses of the toxin in that safe as well! Peter and Cyrus Renault (Jeff Kober) could be working together on that toxin – it wouldn’t be the first time narcissistic Peter took total credit for something someone else did or at least helped on!

General Hospital viewers have to wonder just where Peter picked up that little psychotic gem of a nurse to pose as real Nurse Chloe Jennings, who he killed. Usually, he has contacted henchmen he knew from his work with Helena Cassadine (Constance Towers) or old contacts of his father from the DVX to do his dirty work, but this nurse apparently works in General Hospital under a different name. The safe she locked up the vials in did not appear to be in Peter’s office at “The Invader” or in any of the offices at General Hospital or suites in the Metro Court. Could the safe be in Cyrus Renault’s home? If so, then that begs the question of how Fake Chloe had access to a safe inside Cyrus’ home. Perhaps they are related and she is able to work at General Hospital because she’s Cyrus’ daughter!

GH Spoilers – Cyrus Renault May Be The One Who Manufactured The Toxin And Antidote, Not Peter August

General Hospital spoilers show Cyrus owns a drug manufacturing company in Mexico City and probably owns others. Any one of them could have manufactured the toxin and antidotes for Peter since the two of them are working together. Cyrus’ interest in Peter, as General Hospital viewers will recall, was for him to take down Jason Morgan (Steve Burton). Peter didn’t like that Cyrus had the amount of leverage on him that he did, knowing everything about the night that Peter killed Franco Baldwin (Roger Howarth).

That is why Peter agreed to work with Cyrus, but Cyrus would have to do things for him in return. One of those things might have been to manufacture, or possibly supply, the toxin and antidotes that Peter hinted were based on his late father, Cesar Faison’s (Anders Hove) toxin that he poisoned Tiffany Donely (Sharon Wyatt) with years ago.

This is why Anna Devane (Finola Hughes) was so anxious to try and convince Annie Donely (Caitlin Reilly) to let her have her late father, Sean Donely’s (John Reilly) files, and obviously was able to successfully do so, since she handed them to Dr. Hamilton Finn (Michael Easton) in a recent episode of General Hospital. As evil and twisted as Cyrus is, if he fathered a daughter and possibly raised her part of her childhood, General Hospital viewers can certainly imagine she might come out a lot like Fake Chloe!

The Young And The Restless (Y&R) Spoilers: Elena Fights Imani For Nate