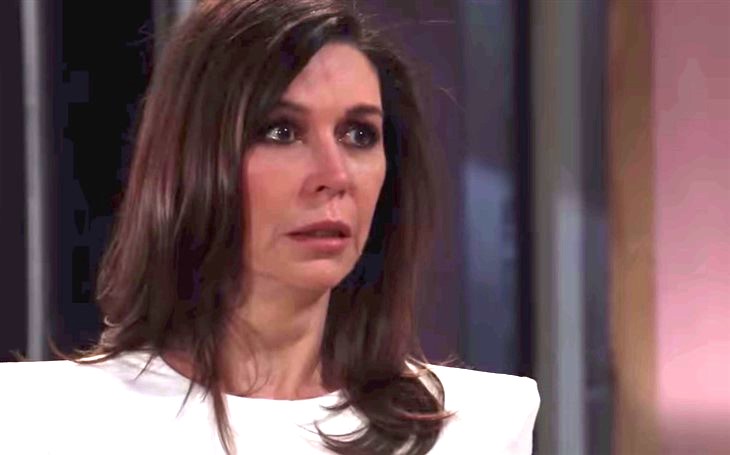 Anna Devane (Finola Hughes) always figures out what the real deal is at some point. She was the one who was able to deduce that Peter (Wes Ramsey) wasn’t really her son and she was remembering Alex giving birth to him, not her. So, it should come as no surprise that after talking to the helicopter pilot and talking to Finn (Michael Easton) that she realizes Finn was the one on the roof with Peter that fateful day.

Of course, Valentin (James Patrick Stuart) wants to know everything she figured out that he couldn’t because his main goal in life is now protecting babies and getting back at Peter. Will they figure out he’s dead, too? (Or at least that Finn and Elizabeth think he is dead?)

As for Elizabeth (Rebecca Herbst), she really wants to tell Jason (Steve Burton) what happened because she knows he won’t turn them in and would definitely be able to help them get Peter’s body out of that GH freezer and someplace a little less weird.

GH Spoilers – Jason Morgan Has To Defend His Choices

Meanwhile, Jason is over at the Q house talking to Monica (Leslie Charleson). She really wants to know what possessed him to agree to marry Carly (Laura Wright) and also wants to know that he will be happy. Jason tells her that if it weren’t for Carly, he wouldn’t even be alive. We assume he is referring to the last time he was shot and she gave him blood.

Sonny (Maurice Benard) continues living the life of a bartender in plaid who left the mob, just like Julian Jerome (William deVry). He’s thrilled when Nina (Cynthia Watros) finally returns and tells her it’s nice that she will be there for Phyllis (Joyce Guy) when she needs all the support she can get. Nina tells him that it’s not just Phyllis that she’s there to see. Will Nina ever have the guts to tell him the truth or will he finally get more memories back on his own? Stay tuned to General Hospital weekdays to see how these stories play out.