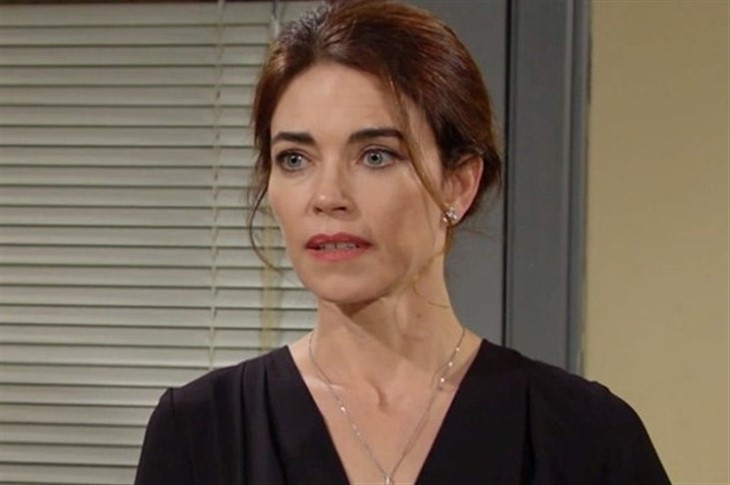 The Young and the Restless (Y&R) spoilers for Friday, July 23, 2021, reveal in Genoa City, Wisconsin Victoria becoming stunned at what she finds regarding her new roommate.

Victoria (Amelia Heinle) doesn’t always think when she makes decisions about her personal life and her personal life can often interfere with her business choices. Meeting Ashland Locke (Richard Burgi) has found her doing some daring things after being extremely bored and lonely for the past year.

She merged their two companies against Victor’s wishes and she asked the dying man to move into her house, essentially kicking her kids out to go live with Billy (Jason Thompson) and Lily (Christel Khalil), which seems highly mother-like and responsible.

However, she may find out that was all a mistake on Friday when she makes a shocking discovery regarding Ashland. Or will this shocking discovery tell her that she didn’t make any mistake at all? Perhaps Ashland’s manipulative and one-expression estranged wife is involved. Tara (Elizabeth Leiner) does seem like she’s been up to something from the start.

Billy (Jason Thompson) can never get Adam (Mark Grossman) out of his mind no matter what he tries to do. That sounds a lot like Sharon (Sharon Case) who can also never get Adam out of her mind but in a different way. Deep down, Sharon wants to be with Adam when Billy makes no secret of the fact that he wants to do Adam in.

On Friday, he wonders just how loyal Sharon is to Adam. Perhaps she is hiding something about him that would help with Billy’s eternal quest to ruin Adam Newman’s life.

The Young And The Restless Spoilers – Elena Fights For Her Man

Elena (Brytni Sarpy) and Nate (Sean Dominic) finally seem to be getting it together and making progress in their romance but Imani (Leigh-Ann Rose) also has her eyes on Nate and Nate seems to be enjoying this. Spoilers say that Elena stakes her claim. We guess she is scared of what she thinks Imani’s sister took from her when she didn’t stick up for her relationship with Devon (Bryton James). Stay tuned to The Young and the Restless weekdays to see how these stories play out.