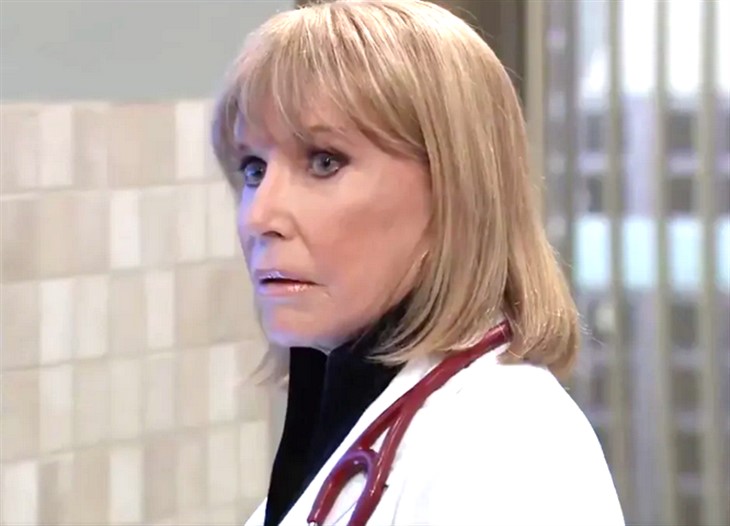 General Hospital (GH) spoilers tease that in Port Charles, NY the Quartermaine mansion has had a lot of people go in and out of the mansion in recent years. From Drew Cane (Billy Miller) to Nelle Benson (Chloe Lanier), the house has been full of so many people it’s hard to get keep track of all the residents. Monica Quartermaine (Leslie Charleston) is nowhere near as picky with who lives it who lives in her house nowadays. But perhaps something special might come out of her generosity. It seems Monica may have found someone that she connects with in the unlikeliest of places.

General Hospital spoilers – Thanks To Brook Lynn Quartermaine’s Pregnancy, Valentin Cassadine Has Made Himself Right At Home!

Brook Lynn Quartermaine (Amanda Setton) slept with Valentin Cassadine (James Patrick Stuart)last year, but she left town shortly thereafter. When she returned,she was pregnant, or so it appeared. It was all part of an elaborate scheme to get Valentin to return his shares of ELQ to Brook Lynn. Valentine agreed but only once the baby was born. This posed a huge problem because Brook Lynn was never pregnant in the first place. The baby she has is Maxie Jones’ (Kirsten Storms). Maxie is terrified that her baby’s father, Peter August (Wes Ramsey) will come and take the baby away from her. So she gave her baby to Brook Lynn for safekeeping until Peter is no longer a threat. In addition, Monica agreed to let Valentine stay in the mansion with Brook Lynn so they can co-parent together. Since Valentin was also worried about Peter, he has hired a bodyguard for Brook Lynn!

GH Spoilers – Monica Quartermaine May Be Interested In More Than Long Conversations With Yuri The Bodyguard!

Monica has found herself quite taken with Yuri the bodyguards’ (Cyrus Hobby) listening skills. He appears to be not much of a conversationalist, but he seems very perceptive about what’s going on around him. Valentin recently watched as Yuri admired Monica’s backside as she left the Mansion to go to work. It seems quite possible that Valentine will encourage Yuri to be friends Monica, and perhaps even pursue a romance.

Valentin can be quite devious when he wants to and if he feels the need to get inside information about what the Quartermaines are doing, he might certainly press Yuri to give him any information that he may overhear or any information that Monica may give him. But hopefully that won’t happen because Yuri and Monica have the potential to be a very sweet and sexy couple.

Will Yuri The Bodyguard and Monica Quartermaine find that their many talks will lead to a sweet friendship and an eventual romance? Will both of them be willing to accept each other’s company? But will Valentin ruin everything by pressing Yuri to be his spy? Love can be found in many places in Port Charles, so stay tuned to General Hospital, airing weekdays on ABC. And don’t forget to check back right here regularly for all your General Hospital information and spoilers!