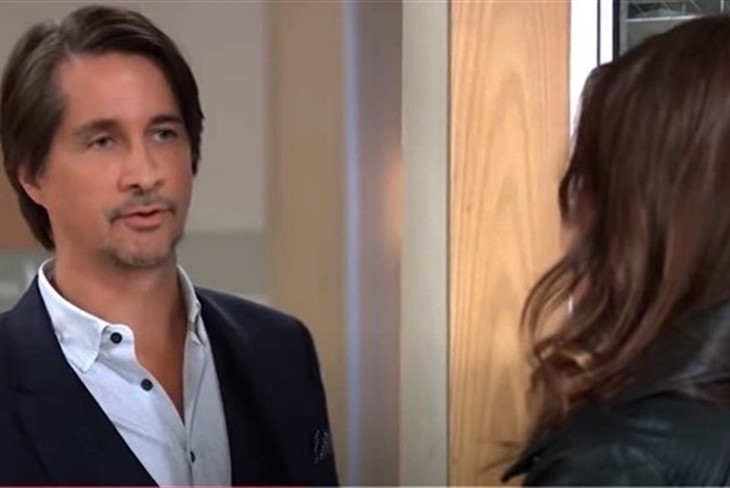 General Hospital viewers will recall that Peter accessed Britt’s laptop in her office at General Hospital for a story, a permission she nearly immediately regretted giving. Finn has always been suspicious of Peter, and concerned for Anna Devane’s (Finola Hughes) safety around him as well as his daughter Violet Finn’s (Jophielle Love). Between the two of them, Finn and Anna had figured out that her late – they hope – twin, Alexandra Devane Marick (Finola Hughes) had to have been his mother, even though Anna had the memories of seducing Cesar Faison (Anders Hove) and giving birth to Peter. Alex just gave too many hints to Anna, and Peter mentioned her saying strange things to her as well.

If Peter has figured it out, he hasn’t said anything about it. As their double wedding – which may turn into an elopement for Finn and Anna – draws near, Finn is increasingly worried. Several months ago, he had looked at the files that Anna had on Peter and called her on her protection of him. It was plain that he had previous associations with the gunman who tried to kill Dr. Andre Maddox (Anthony Montgomery) as he was attempting to restore Franco Baldwin’s (Roger Howarth) memories after Shiloh Archer (Coby Ryan McLaughlin) and Dr. Arthur Cabot (Time Winters) had downloaded Drew Cain’s (Billy Miller) memories off a flash drive into Franco’s brain. It was Peter himself who took down that gunman in the operating room of General Hospital, but it was only to maintain his own cover.

Finn cannot rid himself of a bad feeling about Peter – and he knows that his instincts are usually correct! He wants to find out if his half-sister knows anything about Peter’s past and goes to see Britt. Britt just recently learned things about Peter that she did not know, although her mother did. She had assumed the narrative that Peter had used and that Anna had believed; that although he did some bad things in the past, he sought to change himself and have a fresh start. Britt herself has been in that position and certainly couldn’t fault Peter for that. Jason Morgan (Steve Burton) had told her about Peter having put him in the Boronsky Clinic for safekeeping after the memory transfer between himself and his twin Drew Cain (Billy Miller) didn’t work, with the end game of using him to kill Faison.

Jason had also told her that Peter had framed her mother, Liesl Obrecht (Kathleen Gati) for his crimes and that was why she was imprisoned overseas in The Hague. Britt already knows that Liesl was cleared – per Liesl’s own narrative – but she didn’t share that with Jason nor will she share it with Finn. She knows her mother needs to maintain her cover if at all possible.

However, she will tell him what Jason told her about Peter’s past, some of which Finn already knows from Anna. She will be reticent to tell him that Peter accessed her laptop and Franco Baldwin’s (Roger Howarth) medical files, but she will likely decide to tell him a little white lie and that she had seen someone else had accessed them!