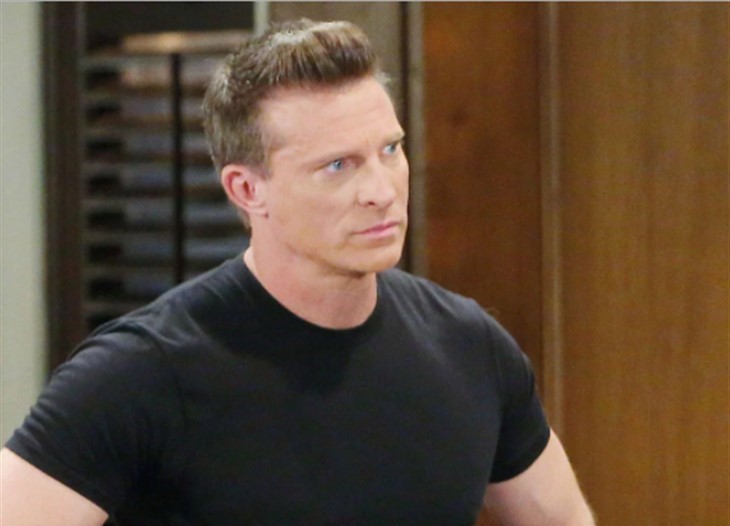 General Hospital (GH) spoilers tease that Jason Morgan (Steve Burton) and Britt Westbourne (Kelly Theibaud) seem to have a good bit of chemistry between them. Some General Hospital fans wonder if Jason and Sam McCall (Kelly Monaco) will reconcile, or if Jason might move on with Britt!

General Hospital viewers will recall that Sam is no longer addicted to the dangerous life that Jason leads. She is more concerned now about being there for her children, one with Jason, Danny Morgan (Porter Fasullo) and one with Drew Cain (Billy Miller), Emily “Scout” Cain (Ella Ramacieri). Obviously, Sam is also concerned about their safety, and poured her heart out about her fears to Carly Corinthos (Laura Wright) in a recent General Hospital episode. Having the scare of her life about Jason and Danny after The Floating Rib explosion didn’t help matters any.

With Drew, she had a more stable and safer life once it was discovered he was Jason’s twin, and not Jason, even though Drew didn’t have his own memories and not very many of Jason’s either, at least not that he talked about. Drew didn’t want the dangerous life of being Sonny Corinthos’ (Maurice Benard) hitman, either. Sam spent quite a while choosing whether to stay married to Drew or go back to Jason when he reappeared after being held prisoner in the Boronsky Clinic in Russia by Peter August (Wes Ramsey) after five years.

She finally came to the conclusion that even though there was some love for Drew as Drew, she still loved Jason more and they reconciled. Now that Sonny is missing and presumed dead, as an indirect result of mob business, this may cement even more her decision to live a life apart from Jason with her children for their own safety and her peace of mind!

GH Spoilers – Britt Westbourne Is Used To Danger, And Grew Up With A Good Bit Of It

Britt, on the other hand, is used to danger and grew up with a good bit of it. As the daughter of Cesar Faison (Anders Hove) and Liesl Obrecht (Kathleen Gati) she couldn’t help but be exposed to the dangerous lives they led, her mother in particular with her years of stalking Faison but never winning his heart, in spite of bearing two children with him. By the time her younger brother Nathan West (Ryan Paevey) was born, however, Liesl had wised up a little bit. She gave Nathan to her sister, Madeline Reeves (Donna Mills) to raise, far, far away from the danger that Cesar could expose him to.

She knew if he knew Nathan was his he would take him from her! Britt didn’t even know he was her younger brother until close to his death. Britt doesn’t seem to be unduly upset about a drug lord being her boss at General Hospital – Cyrus Renault (Jeff Kober). She even told Jason recently she could handle Cyrus and take care of herself when he expressed concern.

She agreed to be his spy at General Hospital and reports back to Jason anything out of the ordinary that may point to Cyrus using General Hospital as a front for drug running. Britt may actually be better matched to Jason at this point than Sam is, who has lost her edge and craves security rather than excitement and danger!