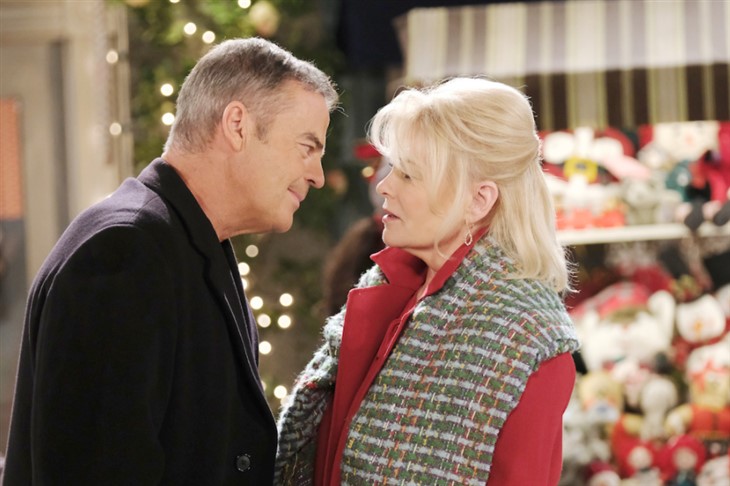 Days of Our Lives (DOOL) spoilers reveal that Justin Kiriakis (Wally Kurth) won’t go public with his love interest. Despite Bonnie Lockhart (Judi Evans) being a changed woman, many people don’t believe it. Bonnie decides that if she had “Stayla” give their blessing, then the rest of Salem would follow. She puts a plan in motion but it goes horribly wrong.

DOOL spoilers reveal that Justin and Bonnie have been seeing each other for a few months now. Despite being together and having a relationship, Justin won’t go public right now. In the beginning, he tried to take his love interest out in public. However, people didn’t react very well or very nicely. Nearly every event, function, or dinner ended in disaster and with a whole lot of drama.

Bonnie has a bad reputation and she did a lot of terrible things over the years. Much of the time, Justin’s late wife was victimized during Bonnie’s schemes. The two women looked exactly alike, so Bonnie would take over Adrienne Kiriakis’ (also played by Evans) life.

One of the worst things she did was sneak out of prison and threw Adrienne behind bars for months. While Bonnie was impersonating Adrienne, including sleeping with Lucas Horton (Bryan Dattilo), Adrienne was stuck in prison. Nobody believed her and it was a miracle that Justin finally figured out the truth and saved her.

Days Of Our Lives Spoilers – ‘Stayla’ Seal of Approval Plan

Days of Our Lives spoilers reveal that Bonnie knows that people respect Steve “Patch” Johnson (Stephen Nichols) and Kayla Johnson (Mary Beth Evans). She figures that if she can get the “Stayla” seal of approval, that the rest of the town will accept her, too. However, the couple is not huge fan of Bonnie. Adrienne was Steve’s sister, so he isn’t as willing to forgive and forget as other people. He’s not shy about making his comments, either. Despite it being a long shot, Bonnie plans on winning Steve and Kayla over.

Days Of Our Lives (DOOL) Spoilers: Lucas Wants To Try To Give His And Sami’s Relationship Another Shot @SoapOperaSpy https://t.co/pKy3EziYeh

Justin and Bonnie have dinner with Steve and Kayla. Justin knows that Steve can be opinionated and harsh. He also knows that Bonnie is impatient and can lash out when she gets frustrated. So, he’s hoping everyone will play nice and behave themselves. Unfortunately, it doesn’t go very well. Bonnie probably tries her best, but there are only so many insults and mean comments one can put up with. When Steve crosses the line one too many times, Bonnie explodes with rage.

Do you think Bonnie will ever earn the approval of Steve and Kayla? What are your thoughts on Justin not wanting to go public with his relationship due to Bonnie’s scandalous past? Perhaps he needs to make a choice. He can either go public or be alone.