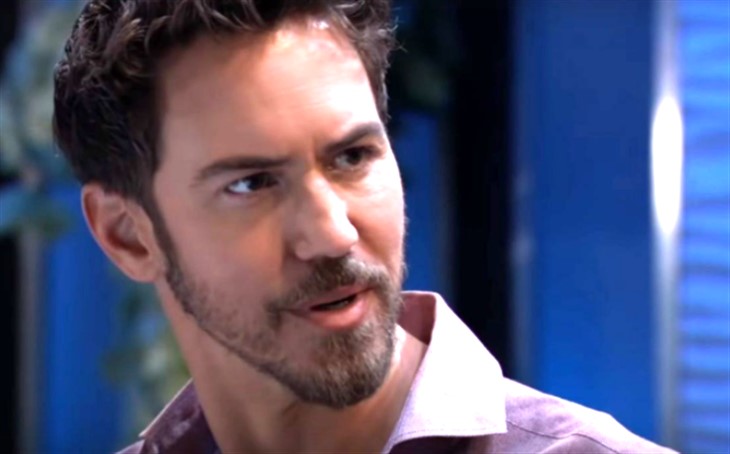 General Hospital (GH) spoilers for Thursday, June 3, 2021, reveal a confrontation that will hopefully lead to a tumble down the stairs we first saw more than a week ago.

General Hospital Spoilers – A Confrontation That Leads To Violence?

Apparently, General Hospital either sprung for a location shoot or put Wes Ramsey on the roof of The Prospect Studios where they tape in LA because Peter August is up there waiting for a helicopter so he can get the hell out of Dodge and Port Charles. So what if his baby was just allegedly kidnapped? He’s wanted by the cops and is not going down.

But Finn wants to talk to Peter. He needs more of that antidote to help Chase (Josh Swickard), whom he still thinks is his son. Finn (Michael Easton) tries to appeal to Peter’s better angels to get what he needs to save poor Chase, but Peter doesn’t have better angels and Maxie (Kirsten Storms) sure told everyone that on Wednesday. (BRAVO Maxie!)

Peter is so close to those stairs and that last hour seems to be up. Is it Finn who pushes him, as it looked like his back standing at the top of the stairs? Perhaps Peter being Peter, he just trips and falls. As Maxie said, he’s the dumb Faison.

It looks like Brook (Amanda Setton) makes it to the hospital with Maxie’s baby and is ready to start a life with her, albeit a temporary one. Does she sneak a visit to Maxie so she can see the infant? Maxie does tell Anna (Finola Hughes) that Peter has absolutely no idea where their baby is and she intends to keep it that way.

To that end, Elizabeth (Rebecca Herbst) finds herself fighting with Valentin (James Patrick Stuart), who thinks the baby Brook is carrying is his. Does she tell him to leave Brook alone considering she just gave birth? Or at least they think she just gave birth.

Over at Portia’s (Brook Kerr) house, there’s more danger as a frazzled, hot mess Cyrus (Jeff Kober) waves his gun around while continuing to bleed all over the place. Laura (Genie Francis) has not been able to talk any sense into this senseless man and Jordan (Briana Nicole Henry) is growing impatient outside. In fact, she warns Curtis (Donnell Turner) if he takes risk out there again she will arrest him. How’s that for a nice, estranged wife?

Kevin (Jon Lindstrom) also shows up at the scene to see how his wife is and also uses his psychological skills to talk Cyrus down. Will he manage to be the one to save the day? Stay tuned to General Hospital weekdays to see how these stories play out.