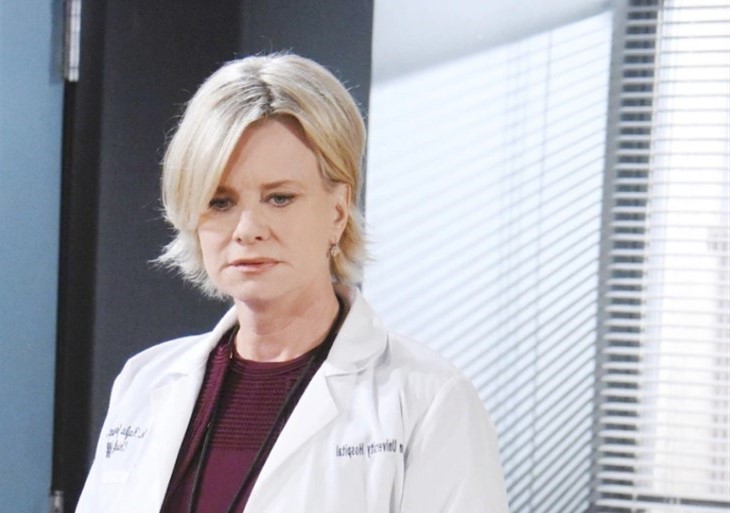 Days of Our Lives (DOOL) spoilers reveal that Dr. Snyder (Michael Lowry) and Kayla Johnson (Mary Beth Evans) hate each other. Even though there are a lot of reasons to despise the drug-dealing doctor, their interactions suggest it’s not just about work. Could they have a secret past that Kayla wouldn’t want to be exposed to?

Days Of Our Lives Spoilers – Issues With Women

DOOL spoilers reveal that it wasn’t that long ago that we met Dr. Snyder. At first, he just seemed like a doctor who had burnout or just had a mean streak. However, shortly after the character made his debut, he made a comment about women. It suggested that he didn’t value or respect females. It suggested he had some bad relationships and put all women in one narrow category.

He also seems to have a problem with women who rank higher than him at the hospital. As fans know, Kayla is one of them. While he’s just an emergency room doctor, Kayla is the chief of staff.

Since Dr. Snyder was first introduced, he has shown exactly what he is capable of. He’s not just a serial blackmailer who likes to dangle his power over his victims’ heads. He is also dealing drugs from the hospital. In addition to that, he tried to stop Shawn Brady (Brandon Beemer) and Belle Brady (Martha Madison) from looking at the hospital’s security footage. The only reason he gave in was to avoid a court order, media circus, and bad publicity for the hospital. Then, he warned Jan Spears (Heather Lindell) that “Shelle” was onto her.

He knew Jan was awake weeks before he called Belle. Even though he helped her at a certain point, he also despised the villain. So, Jan probably had some kind of leverage.

Days of Our Lives spoilers reveal that Kayla hates Dr. Snyder as much as he hates her. There were people that Kayla didn’t have respect for and people she disliked. However, we can’t ever remember her actually wanting to get someone fired. She has a lot of contempt for the man and it seems to be very personal.

It’s possible that Dr. Snyder and Kayla were not just co-workers in the past. Perhaps their disgust for one another seems personal because it is. Most people in Salem are layered, who have done both good and bad things. Kayla is one of those rare characters that are mostly good. Some would even characterize her as ethical, honest, and even wholesome.

However, everyone has a secret. Were Kayla and Dr. Snyder romantically involved at one point? Dr. Snyder might have been abusive or manipulative. Maybe the romance began when Steve “Patch” Johnson (Stephen Nichols) was out of the picture. Then, when he returned, Kayla ended the relationship. Or, he could have been infatuated and she rejected his advances. If they do share personal history, it was a long time ago. Steve mentioned that Kayla’s had trouble with Dr. Snyder for years. Even so, maybe Kayla would like to keep her connection to Dr. Snyder a secret. Not only would it be devastating for Steve, but it could create a hospital scandal.

Do you think that Dr. Snyder and Kayla Johnson are connected beyond work? Do their interactions suggest resentment stemming from a past love affair? Could Kayla take drastic action to protect her secret?