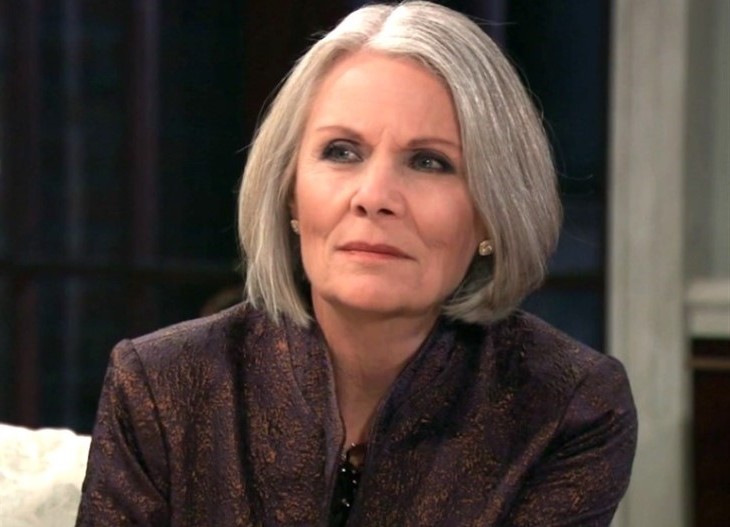 General Hospital spoilers tease that in Port Charles, NY big mouth Tracy Quartermaine (Jane Elliot) will nearly blow the secret that she was trying to keep from being revealed in an upcoming episode of General Hospital!

General Hospital viewers will recall that Tracy has gone to extraordinary lengths to cover up her son Ned Quartermaine’s (Wally Kurth) infidelity! When she realized that Alexis Davis (Nancy Lee Grahn) had fallen off the wagon and she and Ned had a drunken one night stand, Tracy went into scheming overdrive! She set up Alexis to be pulled over for drunk driving, and was somehow able to manage to convince Detective Harrison Chase (Josh Swickard) that she was the one telling the truth about the incident, not Alexis!

She claimed she ran after Alexis who was driving and tried to stop her from doing so. The truth was, Alexis had passed out in the passenger’s seat while Tracy was driving, and she only drove a very short way from the Quartermaine mansion. She then dragged Alexis, with a partially empty vodka bottle into the driver’s seat and got out and mussed up her hair so it would look like she had been running. Then she called 911 and Chase happened to be in the neighborhood, so he responded.

Alexis refused the breathalyzer test and was put in the drunk tank at the Port Charles Police Department. Molly Lansing-Davis (Haley Pullos) had bailed her mother out but then Alexis again started drinking up Jordan Ashford’s (Briana Nicole Henry) vodka, and so her bail would have been revoked and back to the drunk tank she would have gone!

Sure enough, Alexis wound up in danger of spending time in the drunk tank again! She wasn’t taken there immediately, however. If Chase had seen her she may have been! First she made a fool of herself running into Dr. Hamilton Finn (Michael Easton) and his family at Rice Park. She even bragged to Gregory Chase (Gregory Harrison) how she slept with Finn without killing him! Finn, embarrassed to say the least, took her aside and tried to get her to go to an Alcoholics Anonymous meeting.

She refused, but Finn had noticed her hand was bleeding. She said she broke a glass and he managed to get her over to General Hospital where he stitched her up, and called Ned at her insistence. Ned went to help Alexis out with Olivia close behind. Tracy, Ned and Olivia had been having a meal at the Metro Court when he got the call. Tracy didn’t want either Ned or Olivia to go, and Ned didn’t want Olivia to go. She left and followed him when Tracy had had to excuse herself. Olivia had remarked to Tracy in the short time between Ned leaving and her leaving how she was surprised that Tracy had become her biggest fan! Tracy knows she has to keep Olivia from finding out Ned’s sordid secret.

Olivia is such a good wife to Ned, and he, like his father before him, has acted like a cad! Tracy’s intent will be to hang around with Olivia as much as possible so she can protect her from encounters with anyone who could blow the secret! However, in her new protector role staying close to Olivia might backfire. She will have a conversation with someone who knows the secret, possibly Ned, or possibly Monica Quartermaine (Leslie Charleson). They will be discussing the secret and Olivia will walk in and hear part of the conversation, and Tracy will have to hurry to come up with a cover story!

The Young And The Restless (Y&R) Spoilers: Chelsea’s Tragedy Triggers Adam – Phyllis Better Watch Her Back