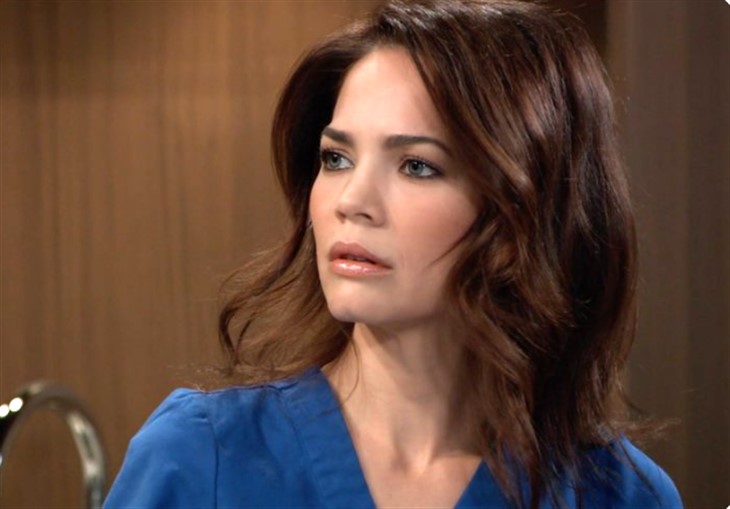 General Hospital (GH) spoilers tease that Elizabeth Webber (Rebecca Herbst) has a lot on her plate right now. In addition to her hours being cut drastically at General Hospital, her son Cameron Webber (William Lipton) is depressed over the death of Dev Corbin (Ashton Arbab), not to mention that her husband Franco Baldwin (Roger Howarth) recently discovered that his brain tumor has returned! So far, she has managed to handle all of this while still having hope that things will work out. But that could very well change very soon once she finds out who the doctor treating Franco is.

General Hospital Spoilers – Franco Baldwin Is Optimistic About His Treatment!

As viewers know, Franco and his father, Scott Baldwin (Kin Shriner) traveled to a WSB treatment facility to find out why he’s hearing Peter August’s (Wes Ramsey) voice in his head. As fate would have it, the doctor they went to see was Dr. Warren Kirk (Jamison Jones), the very same doctor that sent Dante Falconeri (Dominic Zomprogna) back to Port Charles at the behest of Dr. Leisl O’Brecht (Kathleen Gati), with whom Dr. Kirk had fallen in love with.

When O’Brecht rebuffed his advances one too many times, he attacked her on General Hospital. Scott rushed in to see what the commotion was, and ended up accidentally killing Dr. Kirk while trying to save O’Brecht. While Franco is unaware of any of this, he was happy to have O’Brecht on his side once again. But given O’Brecht’s history, it’s unlikely that Elizabeth will share in Franco’s optimism.

GH Spoilers – Does Elizabeth Webber Have Reason To Worry?

The truth is that Franco had part of his tumor removed when he suffered a head injury during the explosion at the Floating Rib. But the rest of the tumor still poses a threat and appears to be inoperable. But O’Brecht is focusing on why Peter’s voice is in Franco’s head. Peter framed O’Brecht for the crimes that he himself committed and she had Dr. Kirk send Dante back to Port Charles to get proof of her innocence. Although he succeeded in obtaining the proof, O’Brecht still wants revenge. If Franco can help her, she may place a greater emphasis on using him to further her ends rather than helping to remove the tumor. Will Franco pay with his live because of her need for revenge on General Hospital?

Does Elizabeth have reason to be concerned about O’Brecht’s involvement in Franco’s treatment? Will O’Brecht place her own needs above Franco’s health? Or will she somehow find a way to not only to save Franco but also get her revenge on Peter? Intrigue is always in style in Port Charles, so stay tuned to General Hospital, airing weekdays on ABC!

And don’t forget to check back here regularly for all your General Hospital news, new episode information and soap opera spoilers!

GH Spoilers: Cody’s Paternity Lie Closely Resembles Sasha’s Past — Will he Learn From…