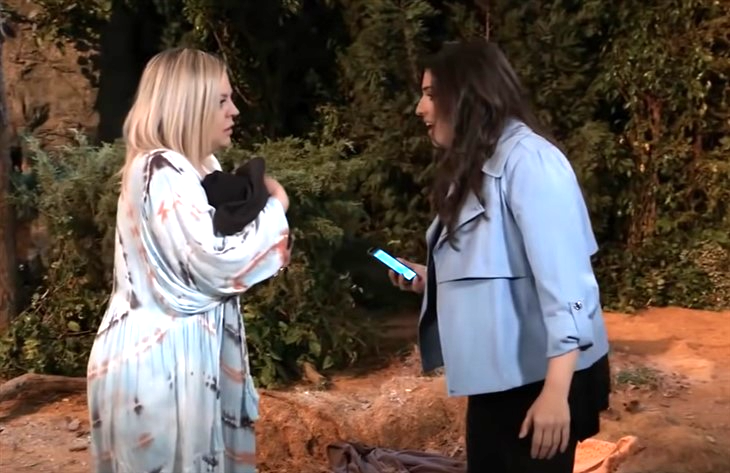 General Hospital (GH) spoilers reveal that a baby war could be heating up in Port Charles proving that the adage, “oh what a tangled web we weave when first we practice deceiving,” is spot on. Right now there is one baby in Port Charles, New York, and two mothers involved in the plot. That is one mom too many. Who will end up with the baby in the long run and the short run? Those are both excellent questions, and the answer may surprise you!

Right now non-mom BLQ (Amanda Sutten) has Maxie Jones’s (Kirsten Storms) baby and passing it off as her own.

She can get away with this because she wore a latex baby bump and deceived everyone into believing she was pregnant. She had an ulterior motive in mind, but as usual BLQ’s scheme was half-baked—no one can be half pregnant!

Alternately Maxie was actually pregnant but desperate to keep her baby safe from the father Peter August (Wes Ramsey). Maxie and Brook lynn hatched a scheme to give Maxie’s baby to BLQ for safekeeping. She would pretend the child did not survive and BLQ would use it to get Valentin Cassadine (James Patrick Stuart) to give back his shares of his family’s company, ELQ.

Easy, peasy, these two ladies thought, let’s band together and all our wishes will come true. Not quite.

Long story short, Maxie was able to transfer the baby to BLQ but only after being kidnapped by a psychotic nurse and giving birth in the woods. BLQ has had the baby a few short hours and it’s clear she’s fallen in love with her. Baby Louise/Baily is being taken care of just as well as if BLQ were her mom. BLQ is talking to her as if it’s them against the world and it’s clear she has some fierce mothering instincts.

What will happen when it’s time to turn over the baby to its rightful owner? BLQ is rash and brash and not always logical—if push came to shove we can totally see her trying to keep Louise/Baily. What recourse does Maxi have?

A lot depends on the terminality of Peter’s condition. Two medical professionals have declared him dead. But one was on the edge of hysteria and the other was near shock, plus they both hated Peter so they are not the most unbiased witnesses in the world.

Is powerful BLQ going to demand equal rights to the baby?