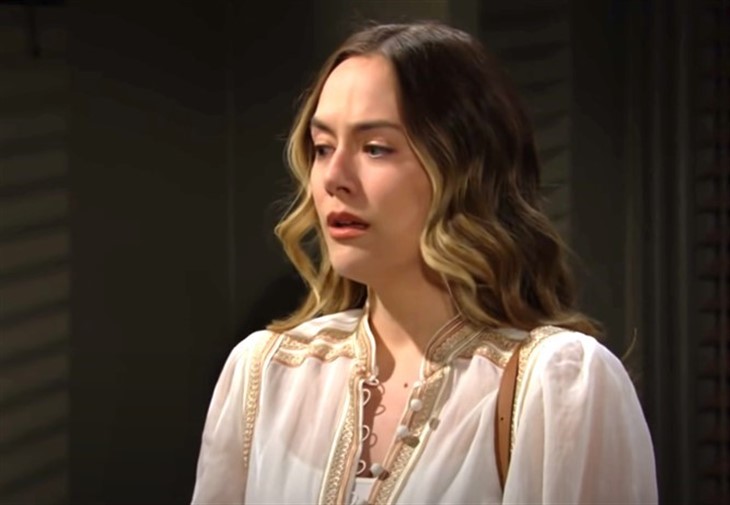 The Bold and the Beautiful (B&B) spoilers document that Hope Spencer (Annika Noelle) is another victim. While Vincent Walker’s (Joe LoCicero) life being accidentally taken naturally makes him the main victim, it’s accurate to state that Liam Spencer’s (Scott Clifton) actions have wronged Hope as well.

Brooke Logan Forrester (Katherine Kelly Lang) believes that involving herself in her children’s lives is a maternal duty. She is right, generally.

Liam told Steffy Forrester (Jacqueline MacInnes Wood) that he had to inform Hope about the cliff house incident. Shortly thereafter he did. But that after the fact admission didn’t overcome his free will mistake.

The accident was different than the mini Steam revival. Beyond the circumstances being criminal, Bill Spencer (Don Diamont) was leading a cover-up that proved to confound Liam.

Clifton’s character isn’t a strong person. His immaturity is the reason why Hope, Steffy, and recently, Bill were able to tell him what to do. At Liam’s age, he should know what’s right and wrong, but he doesn’t.

Contrast how Liam has behaved in the last handful of months with what Hope has done in the recent past. She took responsibility and agreed to be Douglas Forrester’s (Henry Saimiri) parent, which meant being linked to Thomas, whose tie to the Beth Spencer (Madeline Valdez and River Davidson) arc can’t ever be forgotten.

Hope also willed herself to forgive Liam for cavorting with Steffy. There is no doubt that many wives could not bring themselves to do as Hope did. And no one could blame those other B&B ladies.

The strength and resilience that Hope displays are remarkable. Liam recognizes that, while also knowing that her devotion gives him a seeming indefinite pass.

Will Brooke still believe that Liam is the only or best man for Hope after she grasps the implications of the hit-and-run?

Yes, Liam is Beth’s father. But his foolhardy behavior means that he can’t be honestly tagged as a responsible father. The man is facing years in jail for not reporting the accident and now, lying about the details of the night in question.

Brooke will find herself in an unexpected position. Faced with Liam’s revealed actions she will have to ask herself if Thomas is Hope’s better, long-term option?