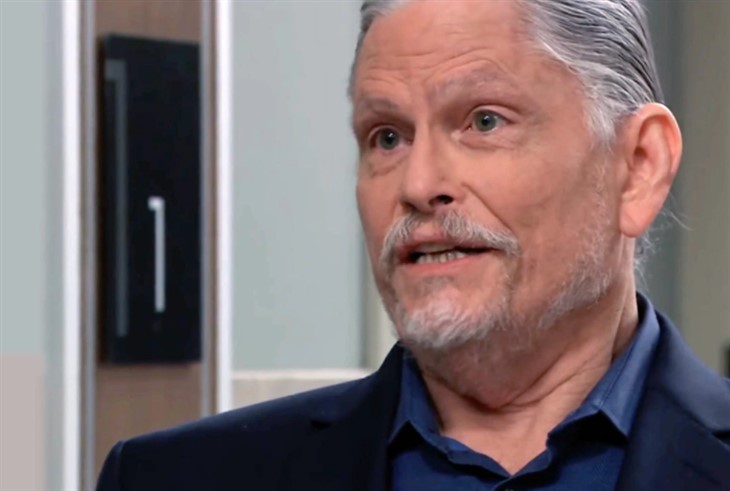 General Hospital viewers will recall that Cyrus has been cranky lately – very, very cranky! Even though now he has his mother, Florence Grey (Annie Abbott) back under his control and where he wants her – to the exclusion of her favorite son, his brother Martin Grey (Michael E. Knight) he chewed out Brando Corbin (Johnny Wactor) for his failure to find her in a recent General Hospital episode.

General Hospital spoilers show that Cyrus’ deal with Peter was for Peter to eliminate Jason Morgan (Steve Burton) in order to pave the way for Cyrus to take over Sonny Corinthos’ (Maurice Benard) territory, in exchange for keeping Peter’s criminal activities and history, which Cyrus knows everything about, secret.

But even Peter has failed to eliminate Jason – he has been too busy with his own endeavors plotting to kidnap his ex-fiancée Maxie Jones (Kirsten Storms) and their baby. Meanwhile, Peter has also been toying with Valentin Cassadine (James Patrick Stuart) and Anna Devane (Finola Hughes) over an antidote for a toxin Peter claims to have created and Detective Harrison Chase (Josh Swickard) ingested and has been fighting for his life as a result.

None of these activities have left Peter any time at all to deal with Jason! According to GH spoilers, Cyrus cannot be happy with Peter, especially now that Jason and Peter’s half-sister Britt Westbourne (Kelly Thiebaud) are in the wind!

General Hospital viewers know that both Cyrus and Peter are men who like to be in control. They each expect to be the one whose underlings obey without question, and Cyrus treating Peter like an underling is likely getting on Peter’s nerves!

A recent  General Hospital episode revealed that Cyrus had warned Peter that he probably had about a week to live after finding out that Jason had escaped General Hospital with Britt. Peter wasn’t fazed – he was not afraid of what Jason could do to him and was even less concerned about Britt’s fate. But what Peter doesn’t understand is that maybe the warning Cyrus had given him about having a week to live was not about the possibility of Jason killing him, it was about the possibility of Cyrus having him killed for failing to kill Jason!

After all, that was how Julian Jerome (William DeVry) died – Cyrus sent his henchmen after him when he went on the run after failing to kill Jason in the explosion of The Floating Rib! Sonny Corinthos (Maurice Benard) finished him off on the bridge that broke underneath them but Cyrus’ order to his henchmen had been to kill Julian. Jason and Sonny killed the henchmen, however.

General Hospital spoilers indicate Cyrus will want to know in no uncertain terms what Peter’s plans are to eliminate Jason, and Peter, as full of himself as he is, will probably lie to him and make up his “plan” as he goes along, figuring once he’s in the wind with Maxie and the baby, Cyrus will never be able to find him!