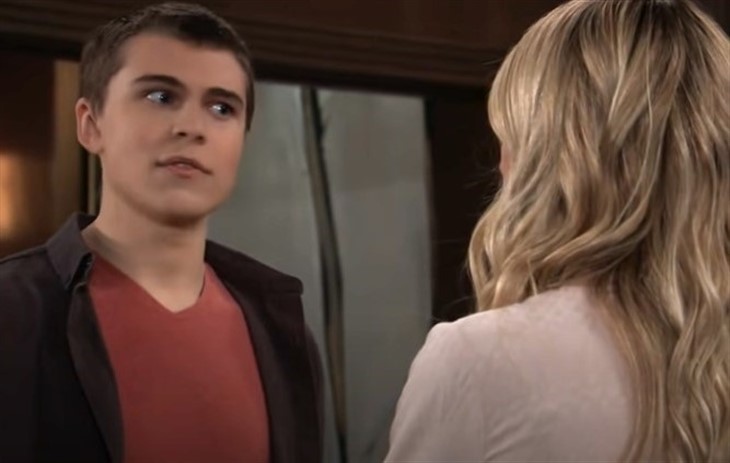 General Hospital (GH) spoilers show Cameron Webber (Willam Lipton) and Josslyn Jacks (Eden McCoy) have been friends for years. Cameron was supportive of Joss when she was facing the loss of her boyfriend Oscar Nero (Garren Stitt) to a terminal brain tumor. Cameron helped Joss to support Oscar during his final days. He helped Joss when Oscar died.

Cameron and Joss have a friend Trina Robinson (Sidney Makayla) on General Hospital. They have helped her to deal with the complex situation with her father Marcus Taggert (Real Andrews). Cameron, Joss, and Trina had a friend Dev Cerci (Ashton Arbab) that they tried to help when he was in trouble. Then the friends had to come together when Dev was killed in the explosion at the Floating Rib. General Hospital teens Cameron and Joss have been able to overcome many problems together.

Cameron has been dealing with the loss of his stepfather Franco Baldwin (Roger Howarth). Cameron knew that Franco could die because he had a terminal brain tumor. However in the end Franco was fatally shot by Peter August (Wes Ramsey).

According to General Hospital spoilers and recaps, Cameron had believed that Jason Morgan (Steve Burton) killed Franco because he was with Franco when his mother Elizabeth Webber Baldwin (Rebecca Herbst) found him. Cameron and Joss began to have problems with their friendship because of the situation surrounding Franco’s death. Joss believed that Jason was innocent and Cameron believed that he was guilty.

Jason had been sent to Pentonville to await trial for killing Franco because he was framed for his death. However, Jason got out of jail because Carly Corinthos (Laura Wright) arranged for Shawn Butler (Sean Blakemore) to attack Jason. Cameron confronted Jason in the hospital about Franco. Cameron was on the scene when Jason escaped from General Hospital with Dr. Britt Westbourne (Kelly Thiebaud).

General Hospital spoilers show Jason was shot while he was getting away. Cameron was arrested for shooting Jason but was released because the evidence proved that he did not shoot him. Cameron found out the truth about Franco from Liz and Franco’s father Scott Baldwin (Kin Shriner). Cameron went to see Joss to see if he could repair his relationship with her.

Joss is trying to deal with a complex situation. She wants to go to college outside of Port Charles and be on the best volleyball team. However, Joss has injured her ankle and cannot play. She is concerned about her mother Carly who has taken over the mafia business that Sonny Corinthos (Maurice Benard) left behind.

Carly and nearly everyone in Port Charles believe that Sonny is dead. GH spoilers reveal Carly needed to take over Sonny’s business to keep Cyrus Renault (Jeff Kober) from taking over the business. Joss and her father Jasper Jacks AKA Jax (Ingo Rademacher) know that Carly is in danger because she has taken over Sonny’s business. Joss was with her father when Cameron came to see her.

General Hospital Spoilers: Cameron and Joss Can Support Each Other

General Hospital Cameron and Joss have started to come back together as friends. Cameron told Joss about the situation with Jason and that he could have been the one to shoot him. Joss was relieved that Cameron did not shoot Jason because they are both are important to her. She is still upset with Cameron but can understand that he has been upset over losing Franco. Can Joss help Cameron to deal with the loss of Franco? Can she keep him from going after Peter because of Franco?

GH spoilers confirm Cameron knows that Joss has been having her own problems. Can Cameron help Joss who wants to support Carly? Will Cameron need to help to keep Joss safe if she faces danger? Joss and Cameron have promising futures ahead of them. Can they help each other to go after what they want?

Tune into General Hospital to find out what Joss and Cameron do to help each other with their problems.  Keep checking Soap Opera Spy for more General Hospital spoilers, news, and GH updates.