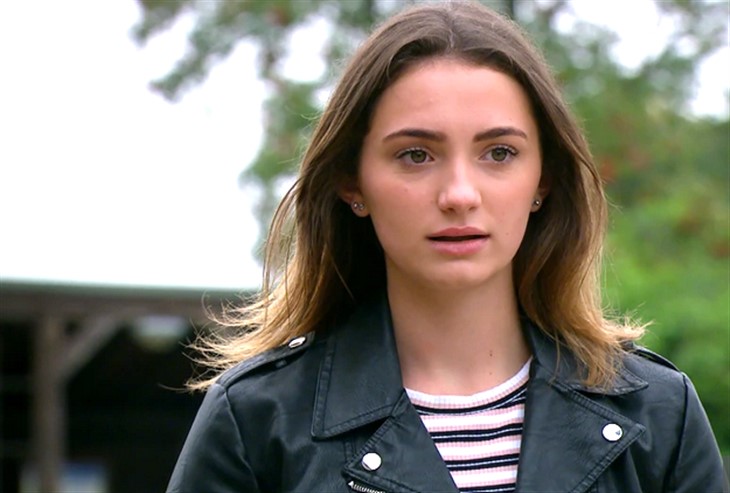 Emmerdale Spoilers hint that Gabby Thomas (Annelise Manojlovic) will soon get a little anxious about leaving and will try to leave sooner due to becoming scared of Kim Tate (Claire King) who will continue to overwhelm her about the baby. As viewers know, Gabby has been trying to come up with a plan to leave the village in order to get her baby away from Kim. Kim has been overwhelming for Gabby and Gabby worries that she will try to take the baby away from her or worse since she continues to talk about the baby and wants her to write up a will with it saying that Kim has custody over the child. This rings warning bells and raises a lot of red flags for Gabby.

In upcoming episodes, Elizabeth Estensen character, Diane will be making a final appearance on the show. This comes after Elizabeth Estensen announced her retirement. Diane has been preparing to leave the village along with Gabby. Eric will offer to buy her shares of B&B. They will also share a moment between the two of them and they show that they care about each other. Diane will go on to visit the pub and will share the box of Woolpack memories with Chas and Bernice. Chase has an idea to throw a farewell party for Diane but it might risk ruining the plan that Diane made with Gabby. As the two need to leave without Kim knowing. Gabby makes her way over to Laurel’s in order to attend the family dinner in order to say goodbye to her family. This makes her overwhelmed about leaving as she does not want to leave everything behind.

Gabby will lose her patience when she comes face to face with Kim who is being irrational when she arrives to Home Farm. She tells Kim that she will not have access to the baby at all. Gabby worries about what she said to Kim as she might have put her plan at risk. She tries to pack her bags without Kim knowing but suddenly gets really bad pains in her stomach. She kept trying to leave the Home Farm, but she collapses on the floor and it hits her that she is in labor. This is the worse timing for her as there is no one around who can help her and her phone has no charge. On top of that, the house is dark due to a power cut. Diane and Bernice are left in the dark as they prepare to pick up Gabby and escape the village.