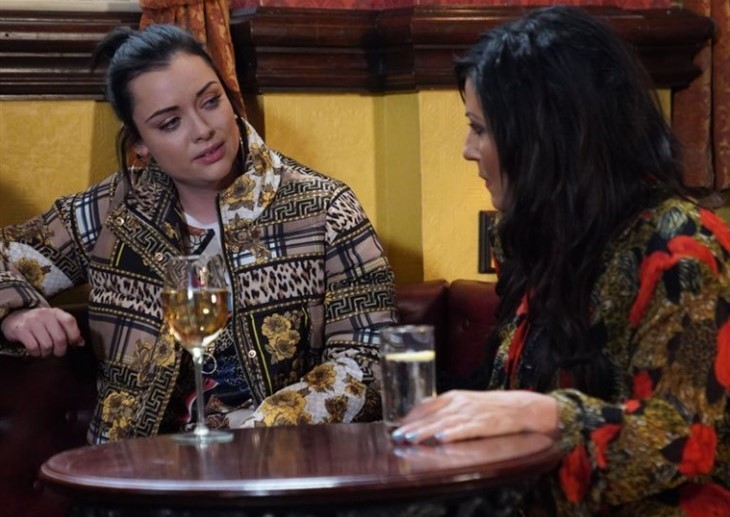 EastEnders spoilers and updates reveal Whitney Dean (Shona McGarty) will give Kat Slater (Jessie Wallace) a piece of her mind and ask how she can sleep at night knowing that she got Kush Kazemi’s (Davood Ghadami) involved in a mess that could land him in jail for five years.

Whitney didn’t waste time to confront Kat when she saw her at the square all loved up while holding a bouquet of flowers.

She heads over to Kat and says, “You really don’t give a damn do you? Kush could get sent down for 5 years for something you got him involved in and look at you… skipping about with your nice new fella by the looks of it. How do you sleep at night?”

Whitney’s words leave Kat feeling upset and guilty. This adds up to the drama that the latter is currently involved in. Kat overhears Phil Mitchell (Steve McFadden) scheduling a trip and thinks that it’s for both of them.

Although she wants to keep their relationship a secret, for now, she feels disappointed when she finds out that the romantic getaway wasn’t for them but for Ben Mitchell (Max Bowden) and Callum Highway (Tony Clay). Phil senses Kat’s dismay and asks her out on a date, which she initially turns down. Is this the start of a serious relationship between Kat and Phil?

Meanwhile, Kush musters up the courage to visit Ruby Allen (Louisa Lytton) and talks about Arthur (Hunter Bell). However, Ruby tells him that he’s a coward since he only turned up because Martin Fowler was out. Kush tries to defend himself and tells her that he can easily expose all her secrets to her husband.

Ruby calls his bluff and when Martin confronts him about his visit to his wife, Kush had no choice but to back down because he didn’t want to lose his friend. Whitney is disappointed when she learns that Kush conceded.

Fans have been informed about Ghadami’s exit from the soap back in 2020. Reports say that “EastEnders” bosses didn’t renew the actor’s contract. Sources revealed that he will be missed but they’re making sure he goes out with a bang. Sometimes the cost of having a big storyline means losing big characters.”

Upcoming scenes show that Kush’s exit will feature some big scenes including a passionate kiss with Whitney. Fans have to stay tuned to know what happens next.