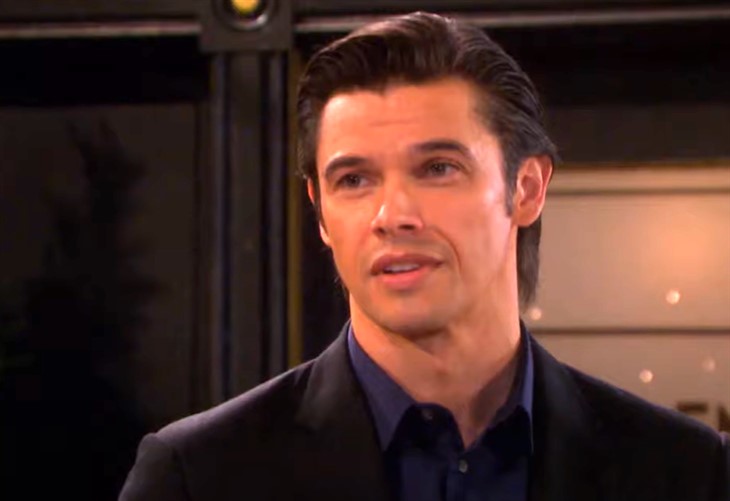 Days of Our Lives spoilers tease that when Xander Cook (Paul Telfer) visits Susan Banks (Stacy Haiduk) in the hospital, she tells him what really happened to Sarah Horton (Linsey Godfrey) in an upcoming episode of Days of Our Lives! Afterwards, he’ll pay someone else a visit and demand answers – from Kristen DiMera (Stacy Haiduk)!

Days of Our Lives viewers will remember back in March, that the real Susan was in Statesville Prison impersonating Kristen, while Kristen was in Salem impersonating many different people, including Susan! Kristen had taken Sarah hostage and was keeping her in the DiMera wine cellar, and she had appeared to be a runaway bride after the night of Xander’s bachelor party. Kristen had wanted to keep an eye on Brady Black (Eric Martsolf) to keep him away from Chloe Lane (Nadia Bjorlin) while Vivian Alamain (Louise Sorel) had wanted Kristen to keep an eye on her son Jake DiMera (Brandon Barash), not wanting him to continue his affair with Kate Roberts DiMera (Lauren Koslow)!

Kristen impersonated both Sarah and Kate during that time, and successfully broke up Kate and Jake as well as Sarah and Xander! Days of Our Lives viewers will recall that as Sarah, Kristen had cozied up to Rex Brady (Kyle Lowder) who had been in town at the time, and told him she loved him! Kristen as Susan had called Xander, giving him a “helpful hint” that she had seen Sarah getting ready to do something “bad, bad’ bad” with Rex!

Naturally, as Days of Our Lives viewers will recall, Xander took off to Brady’s Pub after getting the call from Kristen as Susan! There, a confrontation between Xander, Kristen as Sarah and Rex ensued, when Kristen as Sarah officially broke up with Xander, dumping him for Rex! But afterwards, as Rex was getting ready to take “Sarah” back with him to Chicago, “Sarah” broke up with him, saying she needed some time to think! Meanwhile, the real Sarah, drugged with a syringe that Abigail DiMera (Marci Miller) had previously intended to jab Gwen Rizcheh (Emily O’Brien) with down in the DiMera wine cellar, was inside a large steamer trunk that Kristen had put her inside bound for a Greek island that the DiMera family owned!

When Xander hears of Susan’s condition and finds out she’s in Salem University Hospital being treated for a self-inflicted stab wound, he goes to visit her! The conversation turns to Sarah and how Susan warned him about Sarah and Rex – and although Susan actually doesn’t know what happened to Sarah, she does know one thing; it wasn’t her who called him and gave him the lowdown that night! Days of Our Lives viewers can expect she will explain to him that she had switched with Kristen, and she bets Kristen had something to do with what happened to Sarah – and maybe even impersonated her, because to Susan, that just didn’t sound like something Sarah would have done!

Days of Our Lives viewers can expect that next, Xander goes to the Salem Police Department where Kristen is still in custody, and he knows it was her who impersonated Susan, and he will demand answers! All this time, as Days of Our Lives viewers know, Kristen has taken steps so that no one would ever know what happened to Sarah – she has been sending Maggie Kiriakis (Suzanne Rogers) texts from her phone and got Rex a job with Doctors Without Borders in an area with little to no cell service!

Xander doesn’t know that Rex and “Sarah” aren’t together, but soon he’ll find out! Rex will come home for the holidays and he won’t know what Xander’s talking about when he asks where Sarah is! Rex likely figures she went back to Xander after all! At that point, however, Kristen will be gone and on the run again, leaving Xander and several other people looking for Kristen and looking for answers!