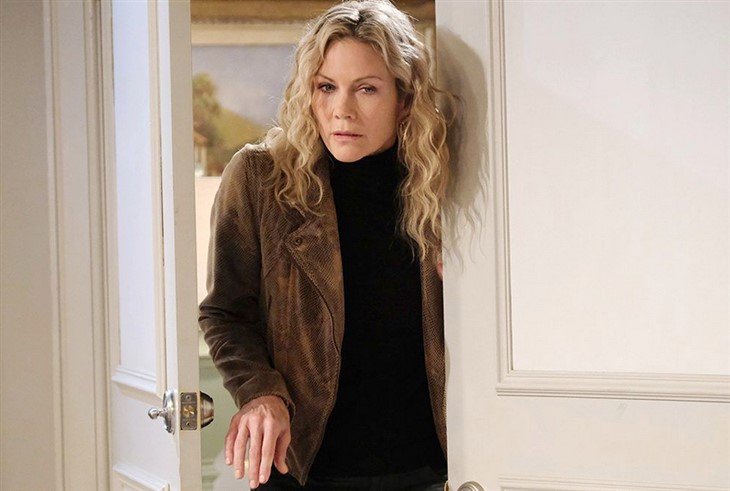 Days of Our Lives spoilers reveal that Lani Price Grant (Sal Stowers) will continue to spiral over what she’s learned about her real parents. Lani will go visit Kristen DiMera (Stacy Haiduk). Even though they aren’t friends anymore, Lani doesn’t know who else to turn to. Kristen does escape and when she does, Paulina Price (Jackée Harry) could be targeted.

DOOL spoilers reveal that Lani is absolutely devastated to learn about Paulina’s secret. Paulina was not the only one that lied to Lani about her parentage, though. Olivia Price (Marla Gibbs) knew all about it and pushed Paulina to keep quiet when she wanted to confess. Then, there is Tamara Price (Marilyn McCoo), who Lani will talk to about the exposed secret.

Eli Grant (Lamon Archey) has to comfort Lani after the phone call. So, Lani will get confirmation that it’s true and Lani’s entire life has been one big lie.

It is teased in Soap Opera Digest that Lani pays a visit to Kristen. The two became best friends, which was interesting considering they were total opposites. Their friendship ended up falling apart. However, with Lani’s life spiraling out of control, she doesn’t know who to turn to. Kristen will feel Lani’s pain and will want to do something to help. Of course, fans know that whenever Kristen “helps” anyone, it usually ends in disaster and with her going way too far.

Days of Our Lives spoilers reveal that Kristen has no intention of returning to prison. Kristen is already getting antsy and has blackmailed Gwen Rizczech (Emily O’Brien) into helping her. It is teased that Gwen and Ava Vitali (Tamara Braun) will forge an awkward alliance. Then, they get someone from the Department of Corrections involved, which we know is played by AJ McLean of the Backstreet Boys.

There are some things that Kristen will want to take care of when she escapes. First, she wants to get rid of Chloe Lane (Nadia Bjorlin), who is blamed for Brady Black (Eric Martsolf) walking away. Then, there is Kristen and Brady’s daughter, Rachel DiMera (Finley Rose Slater). Plus, Kristen will want to deal with Sami DiMera (Alison Sweeney) and Lucas Horton (Bryan Dattilo). Kristen might also have some harsh words for EJ DiMera (Dan Feuerriegel), who refused to represent her.

As for Lani, Kristen will probably try to get justice for her friend by targeting Paulina. However, Kristen doesn’t know the whole situation. With that being said, Kristen always acts first, then thinks later. It’s possible that Kristen could viciously attack Paulina. The twist in this is that a tragedy might be exactly what compels Lani to forgive her biological mother. If Paulina faces death, could that bring the two back together again?