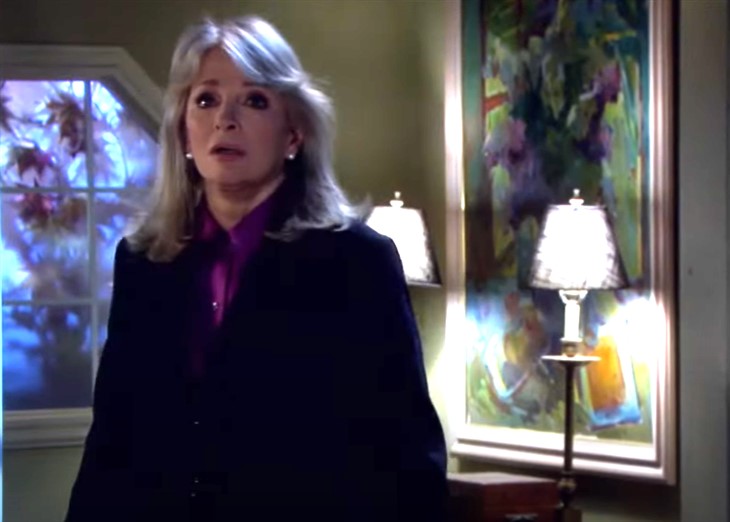 Days of Our Lives spoilers for the next two weeks tease an epic battle, an escape attempt and a frame job. From November 29 to December 10, Marlena Evans (Deidre Hall) will be confronted by a mysterious hiker. Lucas Horton (Bryan Dattilo) vows to save Sami DiMera (Alison Sweeney) and Brady Black (Eric Martsolf) is arrested.

Days Of Our Lives Spoilers  – Escape Attempts And Rescue Missions

DOOL spoilers for the week of November 29 reveal that Sami DiMera (Alison Sweeney) continues trying to find a way out of her captivity. Sami stole the guard’s cell phone, which she used to call EJ DiMera (Dan Feuerriegel), who was no help. Then, Sami called her mother, who just happened to be unpossessed at the time. Unfortunately, the devil intercepted the phone call – not that Marlena could help anyway.

Kristen DiMera (Stacy Haiduk) will escape from her imprisonment with the help of Gwen Rizczech (Emily O’Brien) and Ava Vitali (Tamara Braun). Meanwhile, Susan Banks (Stacy Haiduk) tells Xander Cook (Paul Telfer) the truth about Sarah Horton (Linsey Godfrey). However, when Xander confronts Kristen, she will probably toy with him. Plus, we expect Kristen to tell Xander that Gwen knows and never said a word!

Marlena will convince Ben Weston (Robert Scott Wilson) and Ciara Brady Weston (Victoria Konefal) to go on the run with her. Marlena claims that she’s been abused by John Black (Drake Hogestyn). Isolated and without any communication with the outside world, a mysterious hiker shows up. It is suggested that the hiker is actually Gabriel the archangel, who will make it clear that “MarDevil” must stop this madness.

Days Of Our Lives Spoilers  – Brady Black Framed For Murder

Days of Our Lives spoilers reveal that Maggie Horton Kiriakis (Suzanne Rogers) tries to save Brady from relapsing. Maggie might be too late, though. Brady is attacked by Philip Kiriakis (Jay Kenneth Johnson), who then turns up dead. Of course, did Eli Grant (Lamon Archey) really find a body or just Philip’s leg? In either case, Eli arrests Brady during the week of December 6.

Sami will place a call to Allie Horton (Lindsay Arnold), who tells Tripp Johnson (Lucas Adams) about the abduction. Lucas speaks with Sami and vows to save her. However, once Sami is free, she doesn’t thank her knight in shining armor. Once again, Lucas takes all the risk while Sami rushes back to EJ, who just happens to be in bed with Nicole Walker (Arianne Zucker). So, we will have to see if “Ejami” will reunite or if fans will get another round of “Lumi.”