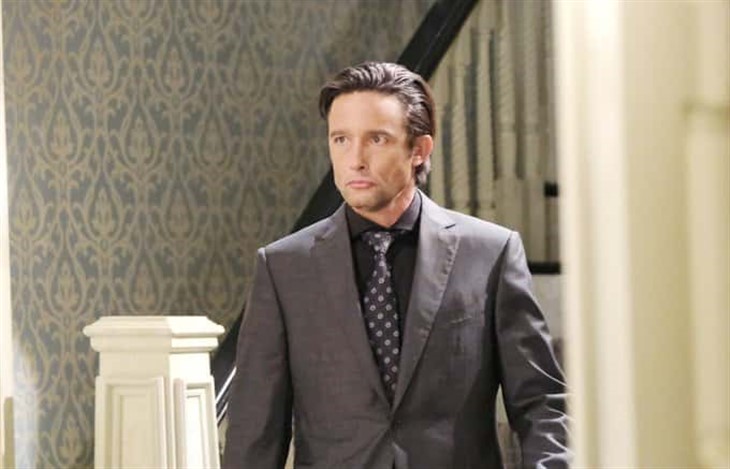 Days of Our Lives spoilers and rumors tease that even though Philip Kiriakis’ (Jay Kenneth Johnson) prosthetic leg is found in the river in upcoming episodes of Days of Our Lives, it doesn’t mean the rest of him is dead! Philip has been insanely jealous over Chloe Lane (Nadia Bjorlin); could he have tossed his leg in the river to frame Brady Black (Eric Martsolf) for his murder?

Days Of Our Lives Spoilers And Rumors – Would Philip Kiriakis Really Go That Far?

The Days of Our Lives winter preview shows a prosthetic leg, which obviously will be traced back to Philip, being fished out of a river. Brady is shown being arrested for the murder of Philip, with Kate DiMera (Lauren Koslow) crying in an interview room at the Salem Police Department and blaming Brady for Philip’s death. Chloe is also crying and asking if it’s Philip, and Victor Kiriakis (John Aniston) appears in shock as he says his son is dead.

The question Days of Our Lives viewers have, since there have been no announcements of an impending exit of Philip’s portrayer, would Philip really go as far as to let his other loved ones think he’s dead all to frame Brady for his murder, just to get back at him? It would certainly be counterintuitive, because he definitely won’t get Chloe back if he’s playing dead! But Philip has done things in his past spurred by his insecurities and tendency towards insane jealousy that have been rather questionable – if he’s gone off the deep end, anything is possible!

Days of Our Lives fans can see that Philip appears to be possibly unstable. Philip sees his relationship with Chloe through a lens of distrust and insecurity, and seems to be a controller rather than an equal partner with her. Days of Our Lives viewers know that no relationship can continue to exist when there is distrust in the middle of the partners.

The Philip of old was actually capable of rather noble acts, but then got into questionable activities such as gambling and siphoning money from Titan Industries, and borrowing money from the mob. That is why Xander Cook (Paul Telfer) busted Philip to his father, and that is also what brought Ava Vitali (Tamara Braun) to Salem. Chloe has grown weary of Philip’s insane jealousy and controlling ways, and has moved back out from the Kiriakis mansion into a suite at the Salem Inn. This, of course, was assumed by Philip to be so she could cheat on him with Brady, and a big blow up happened over Brady being observed carrying her bags in like a gentleman!

Days Of Our Lives Spoilers And Rumors – Will You Appreciate Me If You Think I Died?

If Philip really is as mentally unstable as he seems at times, faking his death and framing Brady for it could serve two purposes. He would be rid of Brady and his perceived competition for Chloe, and Chloe may appreciate him more if she thinks he died, and she’d blame Brady for his death. It’s a pretty twisted way of thinking, but it has seemed to work for Kristen DiMera (Stacy Haiduk) at times!

Days of Our Lives viewers could see Philip laying low for a while and then when Brady is sentenced – perhaps even to the point of being in the electric chair – he could reappear alive to claim Chloe! Philip may think if Brady died it would be the only way that Chloe would finally give her whole heart to Philip, but he doesn’t want to kill Brady – he wants Brady to die for “killing” him!